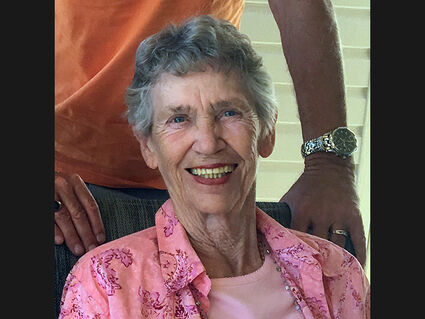 Darlene Joy Candee, 90, of Lake Havasu City, Arizona passed away peacefully on November 13, 2022 with her family by her side.

Darlene was born on November 6, 1932 to Bernard V. and Grace E. Cuff Morrison in Tacoma, Washington. She graduated from Rathdrum High School with honors, then attended Kinman's Business University where she took secretarial and bookkeeping courses.

In 1950 she married her high school sweetheart, James W. (Pat) Briggs and settled in Olney, Montana where their children Beth, Mike and Roy were born.

In 1957 Pat took a job as a cat skinner, or bulldozer driver, for Reid Brothers Logging in Petersburg, Alaska. Pat built a cabin while working in Thomas Bay and in 1959, the year Alaska became a state, Darlene and the children joined him in Alaska. The family lived in the cabin during the summers, returning for school in Petersburg each fall. Darlene loved this environment and always being the poet, she wrote: "I'm a newcomer to Alaska, And this I'd like to say, It's plenty hard to get here, (and impossible to get away.) But look at those rising mountains, Taste that salty air, Feel the vastness about you, (and the dampness straightens your hair)." Her children share fond memories of her reading stories to them by the light of a kerosene lantern and they all share her love of reading.

Darlene held many jobs in Petersburg, including bookkeeper and bank teller, but working as a radio dispatcher with Lon's Flying Service, later Alaska Island Air, was her favorite.

During the 1970s Darlene spent several years working as a weather observer on the Alaskan Pipeline where she met Gary Candee, a pilot. They married in June 1978 and for a brief period lived in Hawaii, spending their time sailing between the islands before moving back to Alaska and building a home in Wasilla. In 2019 they made a permanent move to Lake Havasu City, Arizona. Darlene especially liked to travel with Gary and they took many trips together, exploring England, Ireland, Australia, France, Italy, Spain and many more.

Darlene had many friends and was especially bonded with six women that she treasured most all of her life and they have all gone ahead of her. It's nice to imagine the celebration they are having now, all reunited. Darlene was also preceded in death by the father of her children, Pat Briggs, her parents and her older brother Bernard, a tail gunner who went missing when his B17 Bomber went down over Germany in April of 1945.

No services have been planned but, as requested, her ashes will remain in Alaska. As she wrote in the last verse of her poem A Woman's Slant On Alaska, "But I'm not leaving, not on your life. I'm caught by sights and sounds, Yeah! I like straight hair and boats and tides (I'll always be around.)"