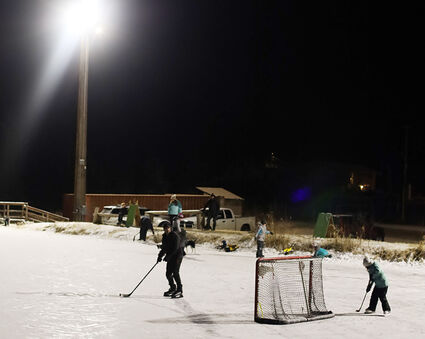 The bright new lights illuminate the ice skate pond as Bristol Moilanen passes the hockey puck to father Jason on Saturday evening. With the lights installed in time for last week's freezing temperatures, the skate pond has been a premier Petersburg recreation destination.

Petersburg Parks and Recreation is keeping spirits high during the holiday season with the completion of the ice skate pond lighting project and their upcoming winter wonderland.

People are already enjoying the lights up at the ice skate pond, which became fully functional last week according to Parks and Recreation Director Stephanie Payne.

The project was made possible by a donation from Fred Haltner and the borough later received additional funding for that project and the ballfield lights project through state legislative grants.