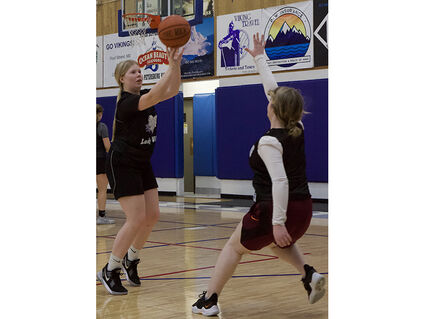 Elizabeth Burns puts up a shot during practice while Eden Davis attempts to block it.

Practices are well underway for the Petersburg High School girls basketball team-a team that has seen much change from the one that was knocked out of the regional tournament last season.

The team graduated four seniors last year, which put into question the makeup of this year's team, but the Lady Vikings have bounced back with 16 girls now on the roster-enough for a varsity and a junior varsity team.

"It was different walking into the gym and seeing that many people in the first couple of practices but it was exciting," Head Coach Dino Brock said.

The current crop of players are a mix of...