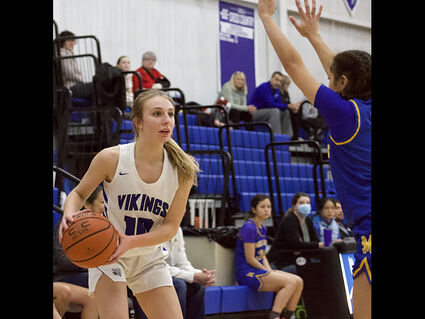 Iris Case defends the ball as she seeks an open teammate.

Head Coach Dino Brock said the losses gave the young team a better sense of what they are doing well and what they will need to work on as the season ramps up.

"At this point in the season it's exactly what you want-a non-conference game against a very good opponent," Brock said.

The Lady Vikings lost Friday's game 67-18 as they struggled to get points on the board, only scoring two in the first quarter but improving to nine score...