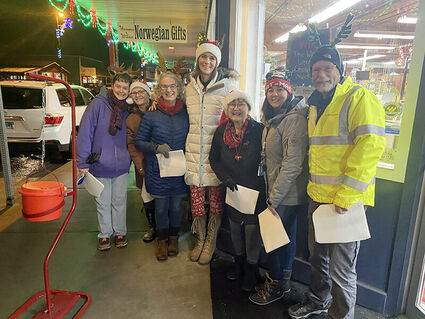 Local holiday singing ensemble, the Twisted Antlers, joined forces with members of the Petersburg Rotary Club to collect donations at the Salvation Army red kettle outside of Hammer & Wikan Hardware.

The famous Salvation Army red kettles, manned during the holiday season by volunteers armed with silver bells, raised a combined $13,206.43 in Petersburg according to Capt. KV Saengthasy.

The donations will be used to fund the Salvation Army's social services budget and also went toward purchasing a couple of Christmas presents for local children.

Though they finished just short of their fundraising target, both red kettles stationed outside of Hammer & Wikan stores were filled on Christmas Eve.

Saengthasy said 2022 turned out to be a good year for fundraising and that the local corps a...