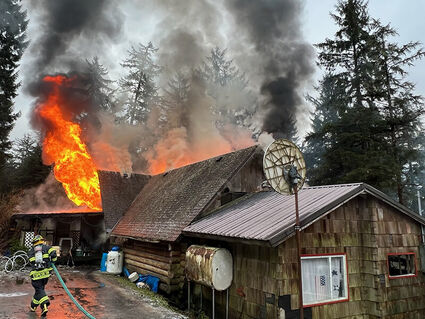 PVFD firefighters work to spray down the blaze at a home near 4.7 Mile Mitkof Highway.

The Petersburg Volunteer Fire Department responded to a house fire near 4.7 Mile Mitkof Highway on Wednesday, which destroyed the interior of the building.

The fire was in an older two-story home constructed with logs at 471 Mitkof Highway on property owned by Michael Boggs.

Though the investigation is ongoing, the fire is believed to have been caused by a wood stove according to Assistant Fire Chief Dave Berg.

No persons were in the building when the fire broke out.

The smoke from the building was first spotted by a driver who contacted the building's owner.