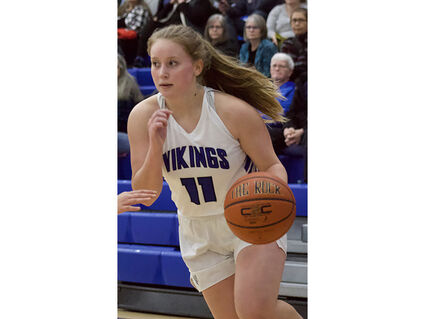 Anya Pawuk speeds along the baseline.

Though the Lady Vikings fell on the court both days, they did show improvement between the losses, which they hope to build on as they progress in conference play.

Petersburg lost the first game last Wednesday 58-18 as the team struggled against the pressure put on by the Lady Glacier Bears.

The Lady Vikings were only down by three at the end of the first quarter, but Haines became unstoppable in the second, scoring 26 to go up 32-8 at the half.

The visitors kept up the...