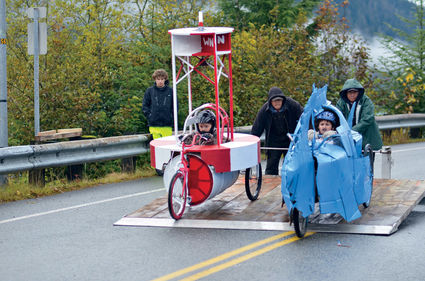 The traditional location for the Humpy 500 is the top of PFI hill. This year, due to road construction, another venue is planned.

Due to road construction downtown, Petersburg Fisheries will hold the annual Humpy 500 in the PFI Cookhouse.

“The Humpy 500 is a tradition here and we want to keep it going,” PFI Plant Manager and Humpy 500 Chairman Patrick Wilson said. “We will still have the races, but on a smaller scale.”

Wilson will have containers available to be picked up by contestants immediately and will be sending information and rules home with the kids from the area schools.

“We will be providing salmon roll containers for the kids to take home, put wheels on and decorate just as they would any other year,” Wilson said. “The competitors will not be able to ride in the cars this year, but the tradition will continue.”

There will still be prizes for the fastest container, best design and best costume.

“Because we will be holding this event in the cookhouse,” Wilson stated. “We will not be able to invite the public, there just isn't the room.”

This is just a downsized version of the normal event.

“We thought about moving to another street,” Wilson said. “But with detours, re-routing traffic and the steepness of some of the other streets, we just decided to bring it all inside.”

The event will take place the first Saturday in October, and is open to kids from second to seventh grades.

“We are hoping the turnout for competitors may be better considering the racers are not as big and can be decorated at a kitchen table,” Wilson said. “This is a wonderful family event.”

Wilson explained it is unfortunate for the kids who will be participating for the last time due to the age constraints but next year the event will be back to normal.

“We have had some wonderful costumes and car designs over the last 18 years,” Wilson said. “Let’s see what the kids can do on a smaller scale.”

Contact Patrick Wilson at PFI for the containers and rules.