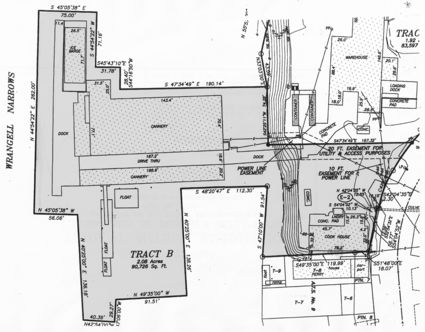 The colored section of the illustration depicts the portion of Mitkof Cannery being purchased from Trident Seafoods by Tonka Seafoods. Trident will retain ownership of the warehouse, bunkhouse and loading dock.

Tonka Seafoods has purchased Mitkof Cannery on Libby Straight from Trident Seafoods according to partners Seth Scrimsher and Wendel Gilbert.

The company’s processing space will increase from 3,000 sq. ft. at its Sing Lee Alley location to 30,000 square feet at Libby Straight.

Tonka will acquire 2.08 acres of waterfront along Wrangell Narrows, the cannery and the cookhouse. Trident will retain the warehouse, bunkhouse and loading dock and 1.92 acres of uplands.

The larger space will allow Tonka to process more product lines including flounder, shrimp, Pacific Cod, halibut, black cod and more salmon according to the partners.

Tonka will add a third smoker to their operation, which will triple the company’s smoking capacity. Tonka smokes salmon products as well as turkeys and beef roasts.

“We’ll be able to take product from boats at the dock,” according to Gilbert. That, in addition to the added processing space, “is the key to our future,” Gilbert added.

Scrimsher said, “Two years ago we ran out of space and looked for properties to meet those needs. This was the fourth place we looked at and it was the one that made the most sense.”

Scrimsher added, “Within two years we hope to double our gross sales as well as the number of employees.”

Scrimsher said it took 7-months to put together the financing and required the sale of Tonka Seafoods stock to fishermen partners to raise the required capital for the expansion of the company.

Scrimsher said the deal was sweetened by the current low interest rates and the “very reasonable price,” Trident sold the property for.

Gilbert said Tonka is working to insulate walls, floors and ceilings in the cannery building. Since the cannery has operated only in the summer there was no need for heat in the processing facility. Water and waste lines are all exposed, and have to be insulated to allow for year-round operations by Tonka.

Gilbert said they intend to install heat exchangers to pull heat from the refrigeration and freezer equipment the company will install along with other heating options. Floors will be insulated and concrete slabs will be poured over the wood planks after they are covered in plastic sheeting.

Tonka Seafoods began in 1982 in a net shed owned by Alan Otness’ grandfather that was originally located along Front Street along Wrangell Narrows. The shed was floated down Wrangell Narrows and set on the beach in front of the Otness home near 7 mile Mitkof Highway. Alan and Sheri Otness and Gilbert were partners in the seafood company.

The operation then moved upland into an addition made to the Otness warehouse on Mitkof Highway and in 1996 moved to its Sing Lee Alley location.

The partners said they expect to be operating out of their new facility by the end of May.