Six survivors and one dead in LeConte Glacier plane crash 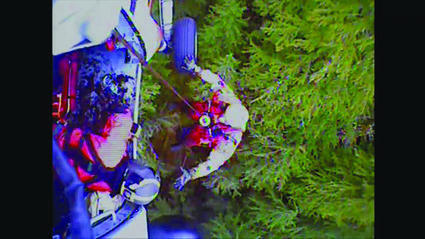 The United States Coast Guard hoisted six survivors of a plane crash at LeConte Glacier Tuesday evening and transported them back to Petersburg.

“I was able to spend about an hour and a half in the helicopter with an EMT,” Petersburg Volunteer Fire Department Assistant Chief Dave Berg said. “We were trying to find the location of the crash, but had no luck.”

Along with Berg, in the Temsco craft, there were two fixed wing planes from Sunrise Aviation of Wrangell out searching as well.

“When the Coast Guard showed up we returned to Petersburg for fuel,” Berg stated. “When we returned to the search area we set up a base at Bussey Creek for any transport of injured but ended up moving to Jap Creek because it was closer to the site.”

According to Berg, the pilot, Adam Peterson, made his way to a clearing in order to flag down the Coast Guard helicoptor.

“The survivors had built a fire and a makeshift shelter,” Berg stated. “They were prepared to settle in for the evening.”

The USCG sent a rescue swimmer down into the area after seeing a person on the side of the mountain.

The wreckage was found at 1,100 feet altitude and the USCG had to use 150 feet of cable in order to get to the passengers according to Berg.

Two of the surviving passengers were taken immediately to Petersburg Medical Center and the other four arrived later.

“Three of the remaining four were ambulatory,” Berg stated. “The fourth was brought in in a basket. All survivors were transferred to PMC by 8:30 p.m.”

According to National Transportation Safety Board Chief Clint Johnson, an investigator from Fairbanks, Bryce Banning arrived in Petersburg Wednesday morning to join Juneau Mountain Rescue making the return trip to the wreckage sight.

“The main goal at this point is to secure the wreckage, if possible,” Johnson said. “We would also like to work in cooperation with the Alaska State Troopers in recovering the remains of the deceased passenger.”

Johnson said that Juneau Mountain Rescue arrived in Petersburg around noon Wednesday afternoon and were soon on their way out to the site.

“We are just in the formable stage of the investigation at this point,” Johnson said. “Investigator Banning will remain in Petersburg several more days in order to gather all testimony needed.”

According to Johnson, probable cause will be listed on the NTSB website stating preliminary findings in the crash and will be available approximately five days after the beginning of the investigation. 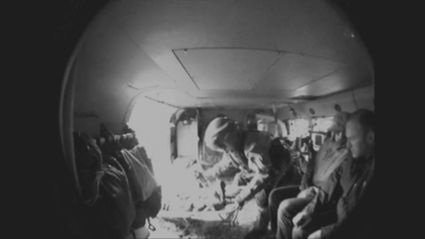 A hoisted stretcher being loaded into the USCG Air Station Sitka’s search and rescue helicopter.

“We like to try to get all information and close within nine months,” Johnson said. “Right now, we are just hoping to recover the craft.”

As of Wednesday afternoon, the Alaska State Troopers identified the deceased as 66 year-old Thomas L. Rising of Santa Fe, N.M. and his next of kin has been notified.

“We are working to make sure Mr. Rising's remains are recovered from the wreckage,” AST Public Information Officer Megan Peters said. “We hope to assist NTSB in that endeavor.”

Peters explained that it could take days in order for the wreckage to be recovered.

“It all depends on the location of the plane,” Peters stated. “We never know what we will find in this type of situation.”

Representatives of Sunrise Aviation and Pacific Wings were asked for comment but chose not to respond at this time.