Biker rides 12,000 miles around the country 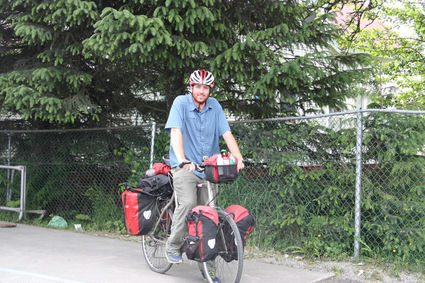 By the time David Gill arrives in New York early November, he will have ridden 12,000 miles around the country on his bicycle. Gill spent four days in Petersburg on his journey to Fairbanks, the last leg of his trek on the west coast.

David Gill, of Staveley in Cumbria, United Kingdom, made a stop in Petersburg as he rides his bicycle around the country.

The 24 year old Brit has already ridden half of the 12,000 miles that it will take him to complete his journey.

“I finished school and had been working for a couple of years,” Gill said. “I was sitting behind a desk and found myself looking out the window a lot.”

Gill spent the two years prior to this trek making television commercials.

“I would have about two really good days a year and the rest of the time was spent looking for work,” he stated. “I figured it was time to get away from the desk and do something, something big, while I am still young enough to do it.”

Gill began this journey in New York in November of 2012. He cycled down the east coast to Florida and was in Fort Walton Beach for Christmas.

As he left Florida, he followed a tropical storm into Alabama.

“The storm ripped the roof off of a church in Mobile just before I arrived in town,” Gill stated. “It was scary and exciting all at the same time.”

His route took him through Louisiana, across Texas and into California. His Alaskan journey began in Prince Rupert and he took the ferry to Wrangell and then to Petersburg.

“I spent three days in Wrangell and it was nice and I did enjoy the time there,” he stated. “I do prefer Petersburg though, the people here are much more approachable.”

Gill's travels will take him to Juneau next and the last leg of the west coast will end in Fairbanks where he will turn toward the east coast for the last part of his journey.

“I am a little worried about the prairie across Canada,” Gill stated. “It takes about three days to drive that distance and it will take me about three weeks.”

According to Gill, the landscape in the Canadian prairie never changes and it is extremely monotonous and others have told him that would be the point he would break if he was going to.

His goal for this project is to meet interesting people along the way.

During his travels, Gill has kept extensive notes and writes a blog about his travels, the people and the experiences. He is hoping to publish a hybrid video book when the project is finished.

“This has been a foolish undertaking,” Gill stated. “When it is over, even if the publishing part does not pan out, I will have so much to look back on. I still have the record of this amazing journey that I had the courage to see to the end.”

Gill has been away from his job since November and has had the good fortune to secure some sponsors for his trip and he laughed as he explained that he is spending all of his life savings and has even taken out a credit card.

“I will go home in debt,” he smiled. “It has allowed me to do this project. If I have to work even harder to pay it off, then I will. It has been so worth it.”

By the time he rolls into New York around November, he will have ridden 12,000 miles around the country and plans to make a return trip. Gill has averaged 1,000 miles per month on this journey.

“I really haven't been able to experience a lot here in Petersburg since I arrived but I have been focusing on writing here because the scenery is absolutely inspiring,” he stated. “This is definitely a place I will visit again in order to see more, experience more and meet more people.”

Gill's website is http://www.vaguedirection.com. Anyone can follow his travels on the blog and read stories of the people he has met along the way.