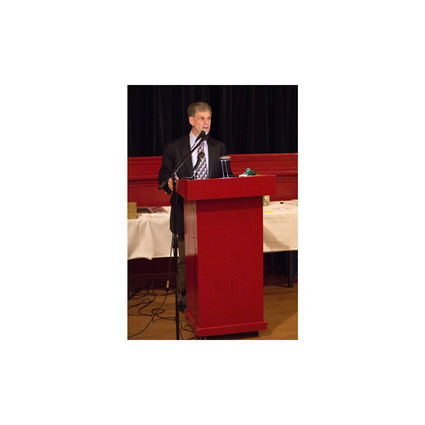 Director of the University of Alaska's Institute for Social and Economic Research Dr. Gunnar Knapp encouraged community members that doing more with less will be a central theme in the coming decade for fishing communities such as Petersburg and others across Alaska.

Knapp was the guest speaker for the Petersburg Chamber of Commerce banquet last weekend.

After touting Petersburg as one of the most successful fishing communities he's encountered, he encouraged the community to adapt in changing times.

"Look for ways to diversify beyond one industry, beyond fishing to, god forbid, sport fishing, to tourism to other resource industries, to other things and your community will be stronger and more stable because of it."

The ability to diversify, Knapp said, was one of four pieces of advice he said was crucial for communities to thrive.

He was optimistic about the world seafood demand and cited factors such as rational fishery management strategies, effective marketing and favorable market conditions as key for the growing world market for wild Alaskan seafood.

But he also warned of future challenges including the fundamental uncertainty of wild fisheries.

"We depend on the ocean for this tremendous bounty but we don't control what happens in the ocean and we don't really understand it," Knapp said.

Knapp said the growth of fish farming is changing the seafood industry and pointed to aquaculture as a potential opportunity.

"It hasn't stopped with salmon," Knapp said. "It's happening with all kinds of other species, with whitefish, with black cod. It's going to happen with species we've never heard of that are going to be prominent in our marketplaces within a few years."

He asked the crowd if it had ever heard of Swai.

"It is ranked 8th among species consumed in the United States," Knapp said to a silent crowd. "It's a made up name for a whitefish farmed primarily in Vietnam and China."

In order to adapt to changing markets and economic times, Knapp encouraged residents to engage in their communities, whether on the board of the local arts council or at the federal level.

"Like it or not, politics at every level from fish politics to local politics to state politics to national politics vitally effects your future as individuals, as businesses and communities," Knapp said. "You can let it happen to you or you can engage in it and try to effect it to ways to benefit you. It's easy to complain about what politicians do and so on, it's harder but it's much more beneficial to get engaged and participate and work for what you believe in."

Knapp said Alaska's oil tax regime referendum coming up this summer is an issue all Alaskans should pay close attention to.

Significant cuts to State operating and capital budgets during the next decade will mean less funding for local government operations and education.

Knapp said the fundamental reason for these tight fiscal times is the State's dependency on oil revenues, which accounts for roughly 90 percent of state revenues.

Alaska's oil production has been declining, Knapp said, to about a quarter of what it was during production peak 25 years ago when 2 million barrels of oil were flowing through the pipeline a day.

"The effect on State revenues has been masked because we saw a phenomenal increase in oil prices," Knapp said. " It's been masked also because several years ago we instituted a significant increase in taxes on oil industry."

Since then, Knapp said, the price of oil and its production has decreased and the cost of production has gone up. The State has since instituted a 35 percent base tax rate hoping to encourage investment from oil companies.

This summer the public will have the chance to vote on whether to keep the current tax regime or revert to the prior tax system that taxed net oil profits based on the price of oil.

"I see our oil revenue going down regardless of what we do over the long term," Knapp said.

Knapp said this year's State budget deficit of more than $1 billion will continue to grow and that Alaskan's will soon need to choose between giving up public services or supporting those services through new means such as taxes or dividends.

"Should we change our tax regime again or not," Knapp said. "You should think very carefully about this initiative coming up this summer."

Knapp wrapped up his speech by commending Petersburg for its sense of community citing the volunteer construction 100 years ago of the Sons of Norway hall where he was giving his speech.

"What you have here, fundamentally, is something really, really special in the kind of place this is, the kind of environment, the kind of healthy industry that you're based on," Knapp said. "But it's something you have to work to keep. It's worth working for."