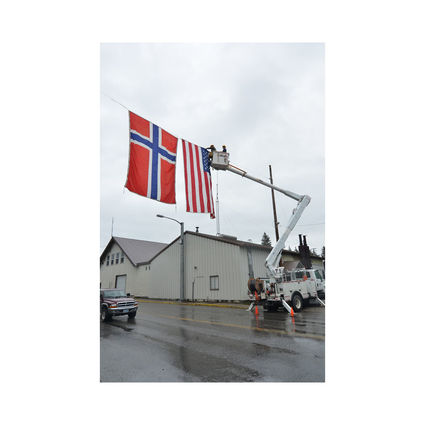 This year's Little Norway Festival will commemorate the 200th anniversary of the signing of the Norwegian Constitution on May 17, 1814.

Mayfest began in Petersburg more than 50 years ago and Janet Holten, Chair of the Little Norway Festival, said it has grown ever since.

"In 1958 when Alma Wallen and Bernadine Trones founded the festival, I don't know if they would have ever dreamed that it is as big as it is now," Holten said. "It was to mark the coming of spring, the sending off of the fleet, the upcoming fishing season, armed forces day and of course the 17th of May."

Activities take place from Thursday through Sunday that, in part, celebrate Norwegian culture and history including traditional Norwegian Bunader dress and dancing and traditional foods. Also be on the lookout for bands, Vikings and Valkyries romping through town.

"Typical highlight are the parade," Holton said. "Everybody lines up at 3:45 on Friday and helicopters fly the U.S. and Norwegian flag and people stroll down Main Street. The festival pageant on Saturday at 3 p.m. is a must. The kids dance, the Norwegian American award winner is honored. We come together to hear the stories of why we are gathering. I hesitate to highlight one thing because there's so many."

A complete schedule of events is listed in this issue of the Petersburg Pilot.

New events include a fireworks display Saturday at 10:30 p.m. with great views from the harbor facilities.

A new sporting event will also be added to this year's festivities. The Petersburg Ragnarok Rollers roller derby team will compete in its first official bout against Wrangell's Garnett Grit Betties Friday night at 8 p.m. in the Petersburg High School gymnasium.

The festival culminates in a Salmon Bake at Sandy Beach Park on Sunday afternoon.