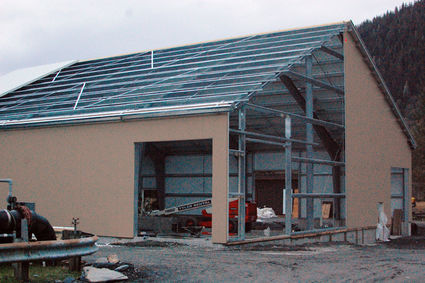 Construction of the new egg incubation room at the Crystal Lake Hatchery is about 70 percent complete. The project is on track to be completed by March 2015, the one-year anniversary of a fire that destroyed the old building.

With a crew working six days a week, construction at the Crystal Lake Hatchery facility is moving along on schedule.

"We're basically on schedule, which is a little bit surprising for a construction project," Bill Gass said with a laugh. Gass is the production manager for Southern Southeast Regional Aquaculture Association (SSRAA), which is contracted to operate the Crystal Lake facility by the Alaska Department of Fish and Game's Sport Fish Division.

The incubation building and generator shed at the facility, along with some 1.2 million eggs, were destroyed in a fire in early March of this year thought to be caused by a mounted heater.

"The main focus at this point is getting the foundation completed, which is a very complicated endeavor with all the pipes and drains. Hatchery floors tend to be fairly complex," Gass said.

The crew has made headway on that work, though, with that portion of the project over 90 percent complete.

"The supply plumbing is done, and we're finishing the last portions of the foundation and the drain systems," Gass said.

With that hurdle nearly crossed, the project is about 70 percent complete and on track for full completion by March of next year.

The budget for the rebuild is $2 million and is coming from the State's insurance plan. Gass said he's working through the State of Alaska for the funds as the facility is state owned.

What about the salmon?

The bad news is that about 1.2 million eggs were lost in the March fire. The good news is that getting eggs back to the facility is being made a little bit easier this year by strong Chinook returns.

"For the first time in, I think, five or six years, we were able to get all the eggs we needed for the hatchery at the hatchery...This year the Chinook return was strong enough that we were actually able to get more eggs than we needed," Gass said.

Those eggs were kept at the Crystal Lake Hatchery in a temporary structure until they were robust enough to be transported to Ketchikan for further development while construction continued on the permanent facility to make it suitable to house the developing creatures.

Gass said his hope is to get the eggs back to Crystal Lake before they hatch in two to three weeks, but this will depend on the state of construction.

"It's gonna depend on how far along the building is whether we make a determination that the situation is complete enough and safe enough that we can put these eggs back into this building and continue the rest of the interior finish work with the eggs in the building," he said.

He added that the eggs were separated into two groups, taken about a week apart, and that the chances of the second group returning to the facility is greater than for the first, slightly older, group.

If any of the eggs aren't able to be transported in the coming weeks, Gass said they'll have to wait until the eggs hatch and progress beyond the sac fry stage into actual fish.

"You can't really transport the different stages of development. But you can transport fish," he said. And that's just what they'll do if the facility isn't ready when the eggs are ready to hatch.

Gass and his team are working to ensure that production is not negatively impacted due to the rebuilding of the facility.

"Our hope and our expectation at this point is that, aside from the fish that were lost in the fire, there will be no other impact to production," Gass said.

Gass said the 2015 release at Crystal Lake will be "at full production...I think, particularly the sport fishery around Petersburg won't even notice anything happened."

What about the fish lost in the fire?

"The fish that were lost were fish that would wind up being released at Neets Bay. We lost a little bit of production from the Anita Bay release and we won't be releasing at all at City Creek...We will release there in 2016 but not 2015," he said.

Despite that, the overlap of different age groups of salmon will lessen the impact on any given year of fishing. 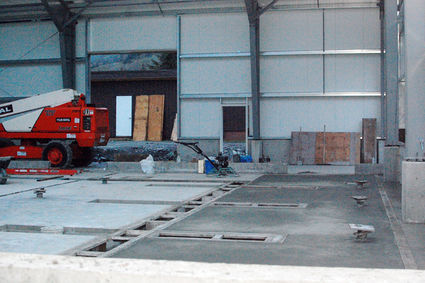 The construction crew working on the egg incubation room at the Crystal Lake Hatchery has completed about 90 percent of the foundation and drain system work.

"They (salmon) return as three-year-olds, four-year-olds, five-year-olds, six-year-olds...It's not like you'll have a season where all the sudden there's no fish."

The fire sparked more than flames when it occurred, many residents were worried about the impact and how long it might take to rebuild. But Gass said he sees a light at the end of the tunnel.

"The loss in production is going to be minimal, and when we're done we're going to have a better facility than what we had."

According to the SSRAA website, the Crystal Lake Hatchery is "one of the oldest currently operating hatcheries in SE Alaska."