16 candidates declared to fill 21 board vacancies 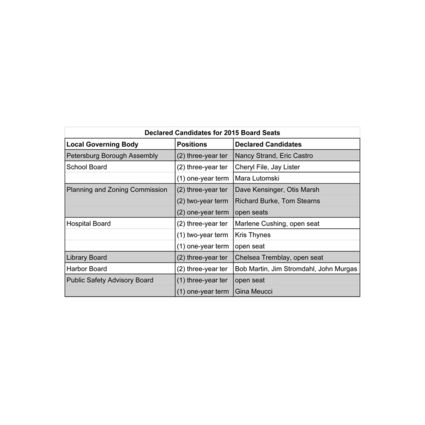 The only contested seat is on the Harbor Board where three candidates have filed to fill two three-year terms. John Murgas and incumbents Bob Martin and Jim Stromdahl will face off for the two seats.

Both three-year terms on the Borough Assembly garnered candidates. Incumbent Nancy Strand will run for her seat again, and newcomer Eric Castro has filed for a term as well. Current Assembly Member John Havrilek will step down after his term expires this October.

Havrilek said he decided not to run again because he felt he was too fiscally conservative for the body. Castro said he felt younger people are underrepresented on the Assembly, which influenced his decision to run.

The School Board will remain unchanged as the three incumbents Jay Lister, Cheryl File and Mara Lutomski each filed to keep their seats on the board.

Kris Thynes and Marlene Cushing, who both began serving in November 2014, have filed to fill two of four open seats on the Hospital Board. Cushing filed for a three-year term and Thynes for a two-year term. Current board members Rocio Tejera-serving since January 2012-and Monica Gross-serving since June 2015-whose terms expire this October did not file for candidacy to continue on the board.

A complete list of candidates is included in the sidebar.