It's time for the annual Rainforest Festival 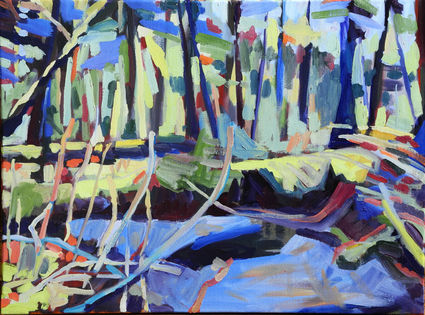 An oil painting by Joe Viechnicki was selected as this year's official festival artwork.

The 8th Annual Rainforest Festival kicks off next week and those attending the festival are going to be offered diverse opportunities, including watching an impactful documentary about a basket weaver, a field trip to listen for bats and wine-making with local ingredients followed by wine tasting.

Things get started on Labor Day with the 2nd Annual Rainforest Run Half Marathon. Participants will be faced with the task of completing the 13.1 mile long course. Organizers are hoping to increase the turnout from the 20 people who completed last year's inaugural event. Walkers start at 8 a.m. and runners follow at 9 a.m. this is a free event, but people are encouraged to donate if they can. Funds generated from the event go toward helping the Petersburg High School Cross Country teams travel to the State meet coming up on Oct. 3.

"It's really helpful because we keep going to State, and State is so expensive," says head coach Tom Thompson

Homemade goods will be awaiting participants once they reach the Sandy Beach finish line. The men's and women's champion get to pick from two donated pies made that morning by Petersburg's own, Sally Dwyer. And there could be a race to come in last, because the final person to cross the finish line also scores some homemade goodies.

"I don't want to call it the losers bracket because I think they are the biggest winners for finishing," Dwyer says, with a welcoming laugh. "But the last person in, the caboose I guess, will get cupcakes or something."

Thursday afternoon begins with Karen Dillman, United States Forest Service (USFS), offering guidance on consuming wild edibles and food samples found in Southeast that could help or hurt you in a survival situation.

Also in the afternoon parents are encouraged to bring their youngsters to the State float plane dock where Alaska Department of Fish and Game divers will have live touch tanks containing sea critters. Kids can learn about diving gear and get up close to sea stars and sea cucumbers. Attendees are encouraged to bring life jackets for extra safety, but organizers will have extras on hand.

The Keynote presentation Thursday night will be speaker Anne Beaudreau, talking about "Food Webs and Fishes in Glacially-Influenced Estuaries of Southeast Alaska." Beaudreau is an assistant professor at the School of Fisheries and Ocean Sciences in Juneau. Her research is unlike any other in the world, she focuses on the uniqueness of estuaries and how marine communities are responding to environmental changes.

"We see glaciers as part of the landscape, but my research is motivated by how changes in those glaciers impact downstream ecosystems from the streams to the marine environment itself," she says. "My talk is structured as three months in the life of a Juneau estuary, so I'll introduce the audience to the cast of characters in my research."

Beaudreau says by highlighting abundant species, other than salmon, the hope is for people to leave with a better sense of what the underwater world has to offer.

"Pacific staghorn sculpin is a big one, a lot of people know them as 'bullheads,'" she says. "They actually provide a really important food source for the animals that we see and care about, including bears, otters and other large fish."

For instance, bullheads consume multiple types of prey fish, playing an important role in shaping the world around them.

Beaudreau will also be giving a tour of Thomas Bay glaciers on Saturday. She will be talking about how glaciers affect habitat for freshwater and marine fish. She encourages people to sign up, and come ready to ask plenty of questions.

Friday afternoon offers the opportunity to view two short films in the Community Room of the Petersburg Public Library. The films are 15 minutes each and include, "Discovering the Tongass" about the natural and human history of this area, and "Landscapes of Change" about the Juneau Icefield and the changes occurring due to climate change in this iconic landmark.

The night events planned include the Annabelle Baker Memorial Art Show at the Clausen Memorial Museum, followed by a field trip to find and listen to local bats. Chris Weiss and Sunny Rice say the event depends on whether or not the weather cooperates. So, if it's not raining after dusk, they will take an iPad out that can pick up bat frequencies. The program even identifies what species of bat is creating the sounds.

The much anticipated arrival of Delores Churchill, who will lead a two-day workshop on Haida Cedar basket weaving, begins on Saturday at 9 a.m. The event sold out in less than 10 minutes. But anyone wishing to meet and learn more about Churchill is encouraged to attend Thursday night's Keynote presentation that starts at 7 p.m. in Wright Auditorium because it includes a documentary featuring her, called "Tracing Roots."

Also on Saturday, Dennis Landwehr will be discussing landslides in Southeast, including one he witnessed early in his career at the Ward Creek Drainage near Ketchikan. Landwehr is an experienced soil scientist for the USFS. He has studied landslides and their relationship to timber harvesting in the Tongass National Forest for more than 20 years. His talk will focus on soil chemistry, how landslides are produced and the different types of landslides seen in this region. The presentation will also touch on the ecological pros and cons of landslides.

Landwehr will also oversee a kids event with local Christina Sargent, that allows children to make edible soil out of crumbled up cookies and gummy worms. The event will take place at the Community Garden behind the Elementary School, and run from 2:30 to 4 p.m.

After wine-making at the Borough Assembly Chambers on Saturday afternoon, wine tasting will follow from 6 p.m. to 7 p.m.

Individuals are encouraged to come out and attend the evening event, Coffee and Poetry. It will take place at the residence, 981 Mitkof Highway, and anyone can bring their original works or favorite poems and short stories to read for the audience. There will be refreshments provided and attendees have the opportunity to bid on desserts.

Sunday includes a workshop in the Assembly Chambers led by guest instructor Sarah Lewis from the UAF Cooperative Extension on preserving your fall harvest of berries and mushrooms, and a kid's event at Sandy Beach Shelter 1, where they can make fish and fern print t-shirts. Which is always a good time with a lot of laughs.

Also on Sunday and Monday Breakaway Adventures is taking festival foragers up the Stikine River to hunt for berries and edible mushrooms.

Anyone interested in attending the festival is encouraged to visit http://www.tongassrainforestfestival.org, for information and schedule changes.