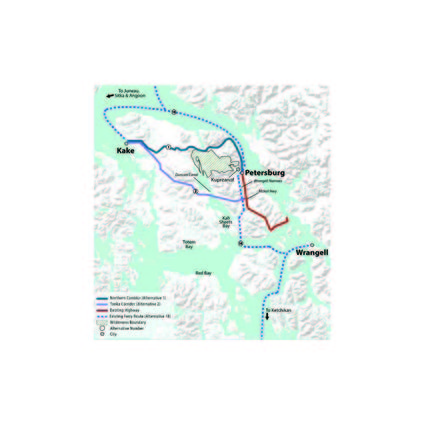 About 15 Petersburg and Kupreanof residents attended a meeting last Thursday night to hear about and voice their opinions on recent developments on the Kake Access Road project.

Meeting attendees listened to presentations by ADOT's Andy Hughes, Seth English-Young from the Federal Highway Administration (FHA) and two consultants working on the project who explained developments with the project's purpose and need statement and a screening process developed to evaluate 21 transportation alternatives.

In addition to road routes on Kupreanof Island, the alternatives also included new or extended ferry service that could provide connections southward from Kake to Petersburg, Wrangell and Ketchikan, as well as northward routes to Juneau and Sitka. All but four alternatives were ruled out due to cost, time, or technical constraints.

Two of the four alternatives still under consideration are road routes across Kupreanof Island. The Northern Corridor would connect Kake with Kupreanof and eventually Petersburg via a single-lane road built on the northern end of the island and terminating in a ferry shuttle across the Wrangell Narrows. Alternatively, the Tonka Corridor would run southeast across the island and cross over to Mitkof via Duncan Canal.

A third alternative looks at enhancing the Alaska Marine Highway ferry service, a possibility that looks increasingly bleak as the ferry service struggles to meet current needs and is facing budget constraints and mechanical issues with aging vessels.

"I think there's enough concern about the road and there's enough desire, at least on some people's part, to see if there's some ferry alternative that can be made viable," said Jeff Heilman, a consultant from Parametrix. "We're not quite ready to give up on it yet, but in reality it doesn't look too likely."

Petersburg resident Bill Tremblay said he'd like to see effort put toward improving the ferries rather than the road.

"I think those (ferries) are probably a higher priority for the connectivity of communities in Southeast Alaska than this road, and I think that this is kind of a misguided effort," he said.

A final option is a no action alternative.

One of the next steps for the team working on the project is to assess public perceptions of the project through a phone survey. Those in attendance weren't shy about sharing their perceptions. Concerns ranged from the cost and feasibility of maintenance to the possible negative consequences to ferry service if the road was built to concerns about the road's impact to wilderness areas and natural resources on Kupreanof Island.

Perhaps the most frequently expressed concern was that the road simply isn't needed.

"You said (at the last meeting) the project didn't meet the purpose and need and here we are with a new purpose and need, and I'm a little frustrated with that," said Petersburg resident and assembly member Cindi Lagoudakis.

Suzanne Wood, of Petersburg, compared the project with the South Mitkof ferry terminal and was concerned about being on the hook in the future to pay back funds if the road wasn't used, as has recently surfaced with the ferry terminal.

"That (ferry terminal) was another transportation project that wasn't thought out, cost millions and it was supposed to have an alternative ferry this summer, which failed," she said, adding that she had concerns about whether all costs of the road were being considered and calculated, especially the cost of a ferry, docks and maintenance.

After one frustrated audience member said the road seemed to do little more than allow a couple hundred people easier access to shopping, ADOT's Andy Hughes responded matter of factly: "It's our job to evaluate all proposals that are mandated for our studies. The legislature funded this project; it's our job to carry it out."

Some $40 million was appropriated by the 2012 Alaska Legislature to ADOT to head up its development. ADOT and the Federal Highway Administration have been working together to draft an Environmental Impact Statement (EIS) and navigate the project through the often lengthy NEPA process.

A draft purpose and need statement, part of the EIS, was first issued in summer 2013, and project leaders have been refining it in the past two years after gathering input during several public meetings.

The project leaders will continue to move the project through the NEPA process, conducting environmental resource studies and commissioning conceptual engineering this year and next. A final EIS is expected in 2017.

All documents related to the project, including the draft EIS and Thursday's presentation slides, can be found online: http://www.wfl.fhwa.dot.gov/