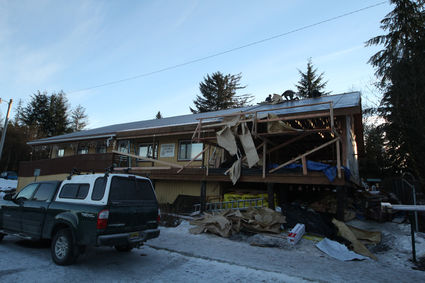 Work on the Petersburg Children's Center expansion is continuing smoothly as volunteers from around the community are donating sweat and supplies.

Volunteers from Rocky's Marine helped install a new roof on the expansion that will allow the Children's Center to enroll around 20 more students from an already staggering waitlist.

The new expansion will enlarge one classroom and add another.

A crew from the Forest Service cleaned up the crawl space under the building last Tuesday and Reid Brothers Construction put the pilings in when the project began around six months ago.

Nordic Electric has volunteered to help with the electric system.

The Petersburg Economic Development Council (PEDC) donated $10,000 to the project. PEDC Liz Cabrera said around $37,000 was donated from individuals and businesses across the community.

The Children's Center needs to put in a new sprinkler system and the project will pause for a short time as they await bids for the work.