Truth hurts: How saying 'I don't love you anymore' saved one couple's marriage 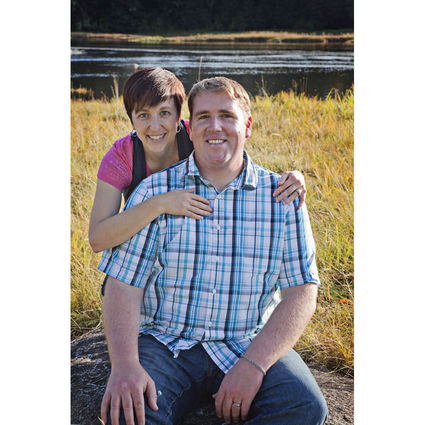 A little more than a year ago on a cold winter morning, not unlike many Petersburg couples, Meggan and Donnie Hayes were eating breakfast. Out of all those couples, the Hayes may have had the most honest, albeit brutally honest, conversation shared in that moment. In-between slurps of cereal, Meggan told Donnie she didn't love him anymore. Not only did she not love him, she told Donnie, she didn't even like him.

"We had been through such a time in our marriage where I just said that because that's what you're supposed to say right?" Meggan said.

Donnie, who is the outgoing director of Petersburg Parks and Recreation, and Meggan are soon leaving Petersburg. Their reasons for moving are several. Donnie plans on starting a business and centralizing in St. Louis to be closer to family. But the main impetus for his family's move is he and his wife Meggan's, struggle with depression. Donnie and Meggan have decided to speak about it because, in part, they think it will help remove the stigma surrounding mental health issues and to let others who may struggle with depression or anxiety know they are not alone.

When the Hayes first arrived in town, Meggan said the newness of Petersburg helped her through her first winter on the island. She felt excited to be in a new place, to meet new people. She made friends and volunteered for community events like the Viking Swim Club and school parent meetings. In the meantime, her family grew by two.

"I ended up being at home a lot and the people who were still doing all those things I just didn't see them anymore," Meggan said. "I felt like it was hard to find a middle ground to show up for everything and saying yes to everyone and saying I can't do that right now but still being able to show up for some things."

A sort of numbness started to creep into her emotional life and she didn't quite know how to articulate or identify what was happening to her.

"Honestly I didn't realize that what I had was depression," Meggan said. "I've heard people talk about depression but I grew up in a family where we didn't talk about that kind of stuff and so it took me a couple years of living here to realize those feelings that I had weren't me not choosing to be happy."

On top of that, she and Donnie were struggling in their marriage. The tension wasn't new and they'd been experiencing problems before moving to Petersburg. In the meantime, she sat at home alone with the kids, everyday.

Meggan recalled a period when Donnie's sister-in-law lost their baby. More than anything, she wanted to be with her relatives, but they couldn't afford to leave Petersburg. Meggan felt helpless. Instead of supporting her family, she sat at home on a dark January day. It had snowed but the rain had turned the white powder into a watery, brown slush.

"We didn't have any money to go anywhere," Meggan said. "We couldn't be there for them. We couldn't get off the island. I was at home with my kids feeling absolutely helpless. There was nothing that I could do."

She took the listless energy, and like she had many times before when she felt restless or isolated, created projects to distract herself.

"I painted a room," Meggan said. "I took the kids' playroom and gutted the whole thing and I painted it all white. It made me feel busy for a little while."

"I would just go into a room and think something in here has to be different," Meggan said. "Because I'm here everyday. It's what I look at everyday."

By this time, the Hayes' marriage had strained to the point of snapping. Although they were a couple months into couple's counseling, Meggan said she believed her and Donnie's marriage would soon end and she didn't care. It's what led to the infamous breakfast cereal conversation.

"I don't have the foggiest idea of what I was eating," Donnie said. "I only remember standing there in utter sadness. I knew things were bad but I never expected them to be that bad."

Meggan, on the other hand, felt a sense of relief.

"It felt awful and it felt great," Meggan said. "I thought, 'I can start here with honesty. That's something I can do. I can't do the other stuff we were doing anymore, the pretending and the trying to be something that we weren't.'"

Donnie said it was the first time he realized that something had to change, that he had to change. He had to reassess everything, how he perceived others' feelings, his own feelings, how he felt about love and how to accept what he could and could not change. He based his self-worth on other people's perceptions and is learning how to love his imperfect self, flaws and all.

They pushed through a year of counseling and day by day, moment-by-moment, things changed. They've experienced ups and downs. They made strides in their relationship only to feel despair after moments of openness and honesty. That honesty hurt. It made them vulnerable, but sharing those moments of vulnerability helped bring them closer.

"I can't tell you the exact moment of what changed or how it changed other than the fact that both of us were working really hard on just being better people, which allowed us to see each other in different ways and realizing 'wow, I absolutely love being with this person,'" Donnie said. "That was a huge change."

"Every week things changed," Meggan said. "We both looked back and we were like, 'we like each other now.'"

Donnie said embracing honesty within his marriage and seeing it bring them closer together has translated to the same level of honesty within all aspects of his life.

"There's a lot of people in this community, when Meggan and I started being open about the things we're concerned about, both our marriage struggles and Meggan's depression struggles, people came out of the woodwork and said 'I've been dealing with that too,'" Donnie said.

That ability to talk openly about her life, her depression, her marriage, and have others identify with her is the crux of why the Hayes' decided to share their story.

"Having someone say 'me too' is one of the most amazing things for whatever it is I'm dealing with," Meggan said. "To have someone else identify with me makes me feel like I'm important, like I matter, that I have other people who can comfort me and vice versa because our experiences are similar."

The "me too" moment is the main reason why Meggan needs to leave Petersburg. Her struggles with depression aren't over and she said she wants to be in a place where she can talk with others, a support group, in a more structured setting. She said she doesn't have that option in Petersburg and hopes that changes at some point.

"There's never anonymity in this town, there just isn't, but if people could meet and get together and maybe start to just talk, maybe out loud, it could bust the shame that surrounds these types of mental struggles," Meggan said.

Donnie said he hopes their story will start a discussion.

"I hope that people that are struggling will stop and start talking to each other and being open about it because there's no shame," Donnie said. "There shouldn't be any shame whatsoever. There should be opportunities for empathy and love and for those of us trying to understand each other to be able to share. I think there are great people in this community that we can have those conversations with and move forward with strong resources to provide for those that are struggling mentally."

Licensed Professional Counselor and co-owner of True North Counseling Jeigh Stanton Gregor has worked to destigmatize depression and related mental health issues. He sees openness among his younger clients but he also understands the barriers to adult support groups in a small town.

"When you show up to your anonymous group and your cousin is there, it's another level of vulnerability for a person in a small community because the odds are you're going to know several of them in several different capacities in your group," Stanton Gregor said.

Still, he thinks the stigma is undeserved and hopes the idea of seeing someone you know will help, not hinder, a person's decision to seek help.

Petersburg Mental Health Services director Susan Ohmer said group therapy is notoriously difficult in small communities because of the issue of confidentiality, however it can offer participants valuable benefits they may not receive during one-on-one sessions with a counselor.

"When it works it is magical because it does things that when you're sitting with a therapist is just different," Ohmer said. "You have a level of an authentic kind of connection with another human being who shares your experience and that's powerful."

That's exactly what Meggan is looking for and what she hopes to find in St. Louis. Both Donnie and Meggan agree leaving Petersburg is difficult.

"It's hard to me to leave because I love the community," Donnie said. "I love living on the water. I love the friendships that I've made."

They plan to move to St. Louis this June where Donnie and an old friend will start a business together giving brewery tours and he later wants to open a restaurant. Meggan will continue with counseling and said if anyone wants to reach out to her she'll be there.

"I'm not afraid to talk about it so if people ever want someone to talk to I'm 100 percent available for that," Meggan said.

She's now in Idaho visiting her sister and won't be coming back to town before Donnie leaves. Meggan says she's open about her life on Facebook and if anyone wants to contact her through that medium, she welcomes it.

Meggan eventually told Donnie she loved him. Although she can't pinpoint the exact moment, she also can't remember how many times she's said it since.

"It just happened naturally," she said. "It came out and I meant it and now it seems as if I can't say it enough. Everyday is so different than it used to be. This is probably how a lot of people feel at the beginning of their relationship."

When asked if she's concerned about what people will think after reading about their private life, Meggan said it doesn't make her anxious.

"When I have shared these sorts of things I've had very few people who have not been supportive," she said. "The most important thing for people is them feeling they are not alone."