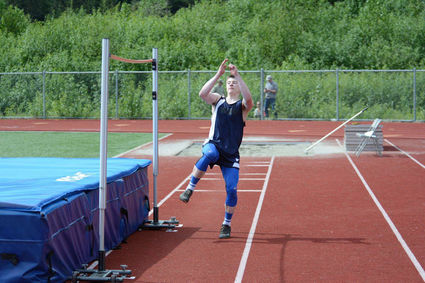 Alan McCay goes vertical during the boys high jump at regionals in Juneau last weekend. McCay won the event and recorded the highest jump of any athlete at the meet.

The boys and girls track and field teams both earned second place finishes behind Sitka at the regional meet last weekend in Juneau. Seventeen athletes qualified for events at the state meet in Anchorage, but only 15 will make the trip.

However, the total is the most head coach Brad Taylor has qualified during his coaching tenure at PHS, he says. Eight juniors are headed to state, including Alan McCay who is showing great promise in his first season on the team.

McCay ended up winning the high jump, with a leap of 5 feet 9 inches, three inches higher than Tyler White of Sitka. McCay jumped higher than any other athlete at the meet and he is seeded second at state.

McCay also earned a spot in the 4x100 meter relay at state with teammates Stuart Medalen, Casey Bell and Axel Vides after the team took first place, finishing just ahead of Thorne Bay. Bell also qualified for four events at state including the relay. He won the 110 and 300 meter hurdles, coming close to breaking school records in both events, and took third place in the 200 meter.

Ethan Cummins, another junior, won the triple jump. Coach Taylor says the junior class on both sides is strong, especially with the versatility of Izabelle Ith and Kayleigh Eddy.

"Ever since their freshman year coming into the program, you could see that potential all the way across," Taylor says. "It's been very exciting to watch these kids grow and develop."

Hannah and Erin Pfundt went second and third in the 800, Erin also took third in the 400. The pair was part of the winning 4x400 meter relay team with Avery Skeek and Mariah Taylor. Taylor had another solid meet, earning a spot in four events at state. She qualified in the shot put, an event she barely missed out on qualifying for at state last season. Taylor will also participate in the triple jump and two relays this weekend.

Tucker Hagerman will go in three events at state, he took second in the 800 meter, and fourth in the 1600 and 3200 meter. Kirk Evens took fourth in discus and just missed out qualifying in the shot put with a seventh place finish. 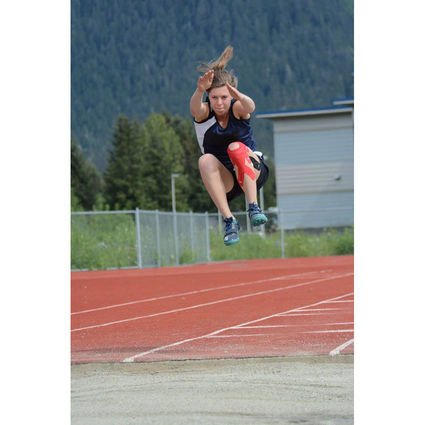 Coach Debby Eddy thought the regional meet prepared the kids for the final push at state and many of them are peaking at the right time, she says. Eddy knows how talented the athletes are and how hard they work to achieve personal bests. She handles the distance runners and says the kids make her job as a coach easy because they are so determined.

"With this group of kids you have to tell them not to go too hard," she says. "The hardest part is being there when they don't quite meet their expectations. And giving them the encouragement to keep plugging away, because no matter how strong of an athlete you are, you're always going to have those tough races."

Hagerman, for instance, has been training all year to break school records. Eddy says he is so close to breaking the record in the 800 meter, just over two seconds off the record River Quitslund set last year at state. This weekend will be the last chance for Hagerman.

Events will begin at 9 a.m. on Friday and Saturday, and anyone wanting to keep up with results can go to asaa.org/sports/track-field/ and find a link to updated results under the "State Championship Results" tab.