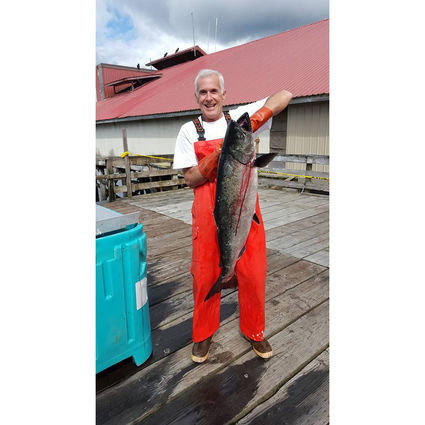 Petersburg Chamber of Commerce manager Mara Lutomski was treated to an action-packed ending of the 35th Annual Salmon Derby on Monday night. It was the first year overseeing the derby for Lutomski, who had fished the derby before, but never experienced the final minutes at the weigh station before.

"It was nice to see that a crowd of people had gathered, which I had been told would happen," she said. "People wanted to see the last action. But everything had been so slow, kind of trickling in throughout the weekend, that I didn't really expect any late contenders for the top three."

But then, Dick Eide and Larry Durst bumped up to the dock. Durst immediately grabbed Eide's last catch of the day and made his way to the scale. At that point, Petersburg's own Mickey Knight was at the weigh station sitting in the lead because of a 37.6-pound king he caught early Saturday morning.

Durst swiftly traveled up the North Harbor ramp minutes before the weigh station closed, and tossed Eide's king on the scale.

"I told him he'd have to run it up there because he was the youngest," Eide said.

The catch was so fresh it flopped when it hit the scale, but it came up short of beating Knight, by less than half a pound. Eide had caught the 37.2-pound king with 15 minutes or so to go in the competition.

Eide said he and Durst were wondering if they would be able to make it to North Harbor in time, and making it just in time was a nice way to end a weekend of fishing. Eide said he's too old to count how many derby's he has fished, but this year's second place is the highest he has finished.

"I would have liked to beat Mick, but that's alright. He'll talk about it all summer," he said laughing.

Knight took the top prize in the derby of $7,000 cash, a derby hat and jacket, and free fish processing by Tonka Seafoods. Eide's second place finish earned $3,500 cash and a derby sweatshirt and t-shirt.

Over $35,000 in cash, gifts and prizes will be awarded to fishermen in order of descending weight at the Thursday night award night at the ANB/ANS Hall. The two tagged fish worth $10,000 and $5,000, managed to evade anglers.