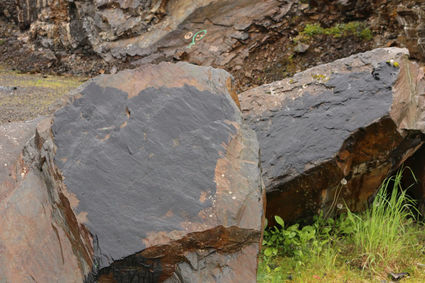 Public Works quickly responded to the unacceptable graffiti at the gravel pit on Frederick Drive and used black paint to cover the images.

People driving by the first gravel pit out of town on Frederick Drive are accustomed to seeing small, scattered signs of graffiti. However, the freshly painted markings found by the Petersburg Police Department (PPD) last Friday while on patrol were completely unacceptable.

The gravel pit is three to four miles down the twisting dirt road, and offers privacy and quiet scenery. The area is popular for bonfires. People stopping by the location can see a slightly faded "Jimi" on one side of the pit, and a smiling green alien flanked by a peace sign and "2016," on the other side.

The recently painted swastikas and white power graffiti, including "KKK" and "Hail Hitler" starkly contrast with the good-natured graffiti at the location. PPD officer Corey Rowley categorized the markings as "hate graffiti." PPD chief Kelly Swihart said he has not seen anything like this during his three years in Petersburg.

"To me, it looks like it's probably some juvenile or young adult that chose to take on this tone for some reason," he said. "I really don't think we have an issue with a white supremacy here, but I do think the graffiti, as it was painted, is hurtful to some folks and offensive to some folks and it doesn't need to be there."

The markings were quickly blacked out with paint by Public Works, according to Public Works director Karl Hagerman.

"We felt it was best to get them covered up as soon as possible," he said. "To save money and effort, we just decided to cover it up rather than try and remove the graffiti with a pressure washer."

Hagerman said the incident was unfortunate and uncommon. People are encouraged to contact PPD with tips and can remain anonymous when doing so.

"We really just want to make sure that we don't have this cropping up all over the community," Swihart says. "There needs to be a little accountability here, and hopefully we will get a tip from the public that will lead us in the right direction."