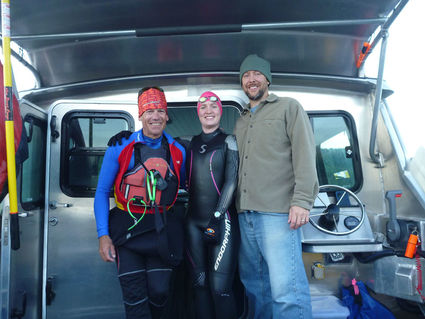 Navigating the Wrangell Narrows can be tricky, if not treacherous, depending on the vessel size and time of year. On June 14, Britta Adams of Ketchikan became the first known individual to swim the body of water from south to north.

"I just knew that I had a tide, and I had six hours," she says. "My goal was to get from Marker 1 to Marker 42, the end of Pinball Alley, and everything beyond that was just a bonus."

The water was 48 degrees when Adams jumped in at 4:45 a.m., and 15 minutes later she was "numbed out" and finding her stroke. Four hours later she ended her swim at Marker 50. The swim measured 10 and a half miles, and she could not have completed the feat without her team, she says.

Adams donned two wetsuits, a couple pairs of booties, gloves and a swimmer's cap. Adams' husband Mark captained the escort vessel, and Mike Schuler took on the role of kayak guide, staying close to Adams and helping her navigate and stay relaxed. Schuler allowed Adams to have regular feedings, every half hour, giving her Ensure or whole-grain Fig Newtons.

The group hit heavy fog at Marker 8, and the next hour was low visibility. Adams stayed close to Schuler, and the conditions forced them to cozy up to the escort vessel, but the fog eventually broke around Marker 21. From then on the water was flat with good visibility, giving Adams an experience she'll never forget.

"Swimming next to the big markers was awesome, because I am so tiny," she says. "It was amazing."

Months earlier the idea for the swim was created from scratch, with Adams not knowing if the feat was even possible. After going over the details with her husband the couple made the decision to attempt the swim.

"I got excited about the possibility in February, but it was not possible without him," Adams says of her husband. "I needed him onboard. I needed him to be my captain."

Research for the swim began with Adams looking at nautical charts, talking with the U.S. Coast Guard and a few knowledgeable Petersburg locals. She also sought advice from Capt. William Hopkins, also of Ketchikan. Capt. Hopkins wrote "Wrangell Narrows, Alaska" a book dedicated to preserving the navigational history of the challenging body of water.

Capt. Hopkins had 30 years of experience with the Alaska Marine Highway System, and spent a good portion of that time navigating the Wrangell Narrows. The two talked over the phone while Adams had a nautical chart of the Wrangell Narrows out on a table, allowing Hopkins to go over details point by point. She had to keep multiple factors in mind, including ferry traffic, commercial crabbing, currents and water temperature.

"I knew anything prior to June would be too cold," Adams says. "It couldn't be towards the end of the summer, because according to Capt. Hopkins the fog really rolls in and settles come August and September."

Capt. Hopkins stressed the importance of neap tides, when it is weak, opposed to spring tides, which are the strongest currents.

"The main thing I explained to her was how the currents operate," he says. "And if she was going to swim it she'd have to be going with the current, not against it, because you're never going to make it going against the current."

At first, Capt. Hopkins admits, he was somewhat skeptical and didn't know whether to take Adams seriously or not. But any uncertainty quickly vanished because she was asking all the right questions and putting safety first. Adams even asked Capt. Hopkins about sea mammals, particularly if she should be concerned about orcas, he says.

"I could see in talking with her that she was determined and going into it with her eyes open," Capt. Hopkins says. "I've never heard of anybody even considering doing this. She did it. And she went into it very seriously, very thoroughly and methodically."

Last week, after word spread of Adams' accomplishment, Capt. Hopkins received a phone call from longtime local Homer Sarber, who lives in the A-frame across the Wrangell Narrows from Petersburg. Sarber told Capt. Hopkins he could not remember ever hearing of someone swimming the Narrows. The only thing remotely close was an old-timer who used to swim from Mitkof Island to Kupreanof Island.

"She is an Alaskan. I met her face-to-face in church yesterday and she's just a lovely person," Capt. Hopkins says. "She's not very big, but boy I'll tell you, there's a lot of power in those arms for her to do what she did."

Adams, 31, stands 5 feet 3 inches tall, and she is an accomplished swimmer who started swimming in the ocean at 18. She has completed Ketchikan's Pennock Island Challenge, where swimmers take a lap around Pennock Island in the Tongass Narrows, a swim of about 8.2 miles. However, after finishing the Pennock five times, she wanted something new and she's always admired the Wrangell Narrows.

Adams was born and raised in Ketchikan, and grew up swimming. She compares swimming in a pool and the ocean, to running on a track then running in the mountains. Ocean swimming is all about respecting the water and letting it tell you how fast you can go. The objective is simply getting in, adjusting to the tide and trying to perfect her stroke, she says. 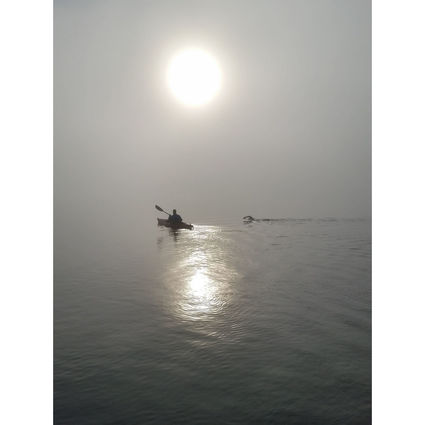 Britta Adams stays close to her kayaker after the team runs into foggy conditions, during their historic 10 and a half mile swim traversing the Wrangell Narrows.

"I will never beat the water. I have to read the water and I have to swim with the water," Adams says. "The cool thing about the water is that it's never the same twice. Every time I get into the water it's going to be a different swim."

She says the swim itself was simply a portion of the team's endeavor calling it "more than a one-woman show." At first, after finishing the swim, Adams was content with her accomplishment, but now her mind has switched to the possibility of swimming the Wrangell Narrows from north to south.

New challenges would be faced and new research would be necessary, but it's an option. Adams is not looking to tackle the body of water and test its power during dangerous times when fog or snow are present. She simply wants to experience the water on terms she can be enjoy.

"I wish I could breathe under water, I'd be out there all the time," she says laughing. "I love the water."