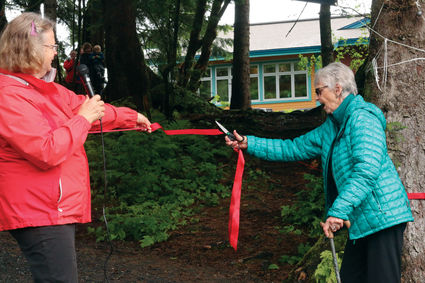 Around 100 locals showed up to celebrate the opening for Petersburg's Centennial Park on Saturday, July 2.

A celebration for the opening of Centennial Park, the latest addition to town and the Petersburg Public Library, took place last weekend with around 100 people showing up for the event. Locals gathered on the Birch Street boardwalk were treated to Janet Holten singing "Alaska's Flag," and a few words from Sue Paulsen before Polly Lee took center stage.

Lee gave a brief history of the property, and spoke of the importance it held to her and her late husband, Eldor. The couple donated the land for the park to the then city of Petersburg in 2008, before the new library ever opened. Lee also thanked everyone who helped bring the park to life: a feat not easily accomplished.

The quiet corner of Hammer Slough has quite the family history for Harold and Magnhild Lee, also known as Papa and Mama Lee. The two were among the early immigrants who settled in Petersburg. Papa Lee came to Petersburg in 1902 and Mama Lee came here in 1906, according to Lee.

One of Lee's favorite attractions at the opening was an oil painting of the property done by her husband when he was in high school. The painting shows the family boat the Rival, used for fishing trips up the Stikine River, and Papa Lee's little white "bachelors shack." The shack was a house Papa Lee fixed up when he and Mama Lee were starting their family. Eldor Lee was eventually born in the family home.

The site itself has a history dating back to Tlingit tribes, who used it for seasonal fishing grounds. Many years ago, Eldor and Polly found original wooden stakes when the state was putting in the new bridge at Hammer Slough. The excavation process stirred up enough ground to uncover the antiques, and the couple ended up bringing a couple of stakes home. They are considered a prized-possession still treasured and being kept safe indoors, Lee said.

Papa and Mama Lee eventually moved up the hill, and the land proceeded to change hands. However, Eldor Lee jumped at the opportunity to buy the property back, shortly after he and Polly Lee were married.

"I made a joke out of it being a shrine because Eldor was born there," Lee said, laughing.

The land stayed with the Lee's until it was gifted to the city of Petersburg, with only a few minor caveats for what would become of the property. Lee says the family wanted Petersburg to maintain the natural path through the area with an accessible grade so everyone could enjoy it. The family also wanted to have some trees removed, but the main objective was a place everyone can enjoy, Lee said.

The park will receive a couple more details as time goes on, including some benches for visitors to rest on, a totem pole, and a covered shelter that could be used by someone waiting for a ride or teaching outdoor activities, like a bike repair workshop.

There will also be two wooden signs made by Petersburg High School shop students, telling the Lee family history of the property in the fall. The signs will then be installed at the beginning and end of the park.

Part of the event was the official unveiling of the newly completed library landscaping which gave organizers the opportunity to honor art inside and outside of the library. After Lee cut the ribbon to the park and took the first stroll though it with her son, Eric, the group took a tour of the landscaping. Andrea Weathers shared details with the crowd about the gardening, something Lee also enjoyed about the day.

Lee hopes the park and beautiful landscaping will increase the investment residents have in Petersburg, and inspire them to take care of their surroundings and take care of the environment.

"I am astonished by the extent of the landscaping, but like so many things that are new, you just have to get used to it. I think it's marvelous." Lee said. "I am enormously pleased at how everything has come together. I think it will be inspirational to Petersburg."

The landscape was a team effort, with Ola Richards and landscape architect Monique Anderson from Sitka taking on its design. Borough groundskeeper Jesse O'Connor lent his skills to completing the landscaping work by overseeing a handful of helpers. Reid Brothers handled the rock work, and Jessie West Construction laid the cement. Chelan Produce provided plants for the project and Sue Paulsen donated the historic fish trap anchor in front of the library.

According to borough librarian Tara Alcock, the funding for both landscaping and Centennial Park came from a combination of state and local funding, with local funding coming from individuals and business in or around Petersburg. 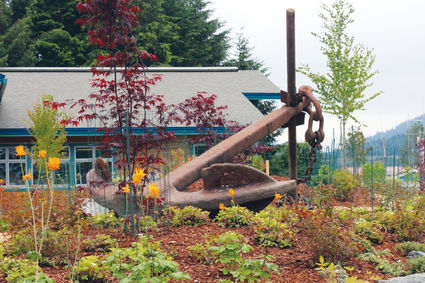 The weekend celebration also gave locals an opportunity to learn more about the new landscaping at the library.

Alcock said part of the reason for such extravagance was the fact the library had funding available, now. Organizers wanted to make the project memorable and lasting. Alcock says it was exciting to see how many people came out to support the competition of the project, and it was well worth the years of planning to watch Polly Lee cut the ribbon.

"It was spectacular, really couldn't be happier with how it went," Alcock said. "Polly has some very deep connections in the community, so I think a lot of those folks were there for her."

Paulsen, who is president of the Friends of Petersburg Libraries, echoed the sentiments of Alcock. Her biggest thrill was having Lee there at the opening, along with so many people that made the park and library landscaping come together, Paulsen said.

"What I liked most about the day, was recognizing the convergence of so many supporters that brought this ship to the dock," she said.

Lee said Petersburg has been a wonderful place for family to live and grow, and the gift of land for a park is simply her family's way of giving back and saying thank you.