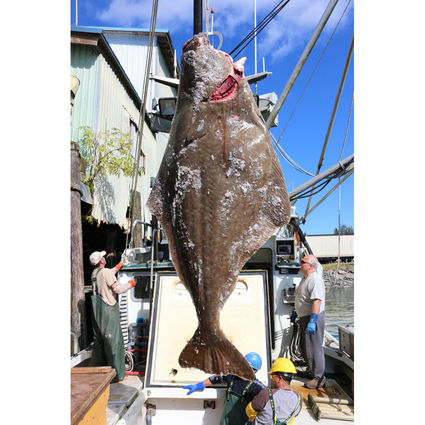 Doug Corl, left, and Brian Mattson prepare to offload their massive catch at PFI on a sunny Sunday afternoon.

Brian Mattson and Doug Corl are no strangers to catching fish, the pair have fished together for almost two decades, and last weekend was no exception. Around 10 p.m. on Saturday the local fishermen hooked a monster.

They made a quick trip on the F/V Day Spring to Thomas Bay, rather than going south of town, because they drew a NOAA observer. Two sets later they had a nearly 400-pound halibut aboard. They caught the fish "right where everybody goes tanner crabbing," Mattson says.

"Normally we catch some big fish in Thomas Bay," Mattson said. "On one set we got this fish and another fish, and the other set didn't have anything."

Mattson's been fishing since 13 or 14, like many local fishermen, but now he can tell a story unique to Petersburg that needs no embellishment although the event itself was uneventful.

"A lot of the smaller ones they'll move the line around and stuff, but this one just came up," he says. "We were expecting it to fight, but it never fought."

It was obvious they had a special catch. After using a shark hook to hoist it aboard they measured it and checked the Tide Book. The book, using length of fish, estimated the weight of the fish to be around 435 pounds. The fish ended up weighing just over 395 pounds on the scales at PFI in Petersburg.

Corl sent a picture to his son, who was out seining, and he put it on Facebook. On Sunday, when they placed a call to PFI to schedule a landing, a cannery employee told the fishermen they had already seen a picture of the fish, shocking Mattson.

Once the Day Spring hit the dock at PFI, the catch had the attention of cannery workers and management alike, and quickly became the focal point of every camera around.

"It's been a long time since we've seen a fish that large," says Patrick Wilson, PFI plant manager. "It's a rare occasion when you see a fish that big, no question, and it's been many years."

PFI does not track individual catches, so no record is available for largest halibut processed at the cannery, but it's definitely one of the biggest Wilson's seen. He says halibut average 20 to 30 pounds, with a handful over 100 pounds each year. Big fish bring more money per pound, and the catch was worth about $2,700, Wilson says.

"It's always fun to see something unusual like that, for sure," he says.

Levy Boiter, port sampler for the International Pacific Halibut Commission, meets longliners at the cannery to monitor catches. Boiter took out the fish's ear bone, or otolith, which

he will use to age the fish. Otolith's

rings, adding rings as the critter ages, making the process of aging a halibut fairly easy.

Boiter figured the fish was anywhere between 25 to 45 years old. He's been at PFI for 17 years and remembers a halibut a couple years back weighing around 350 pounds, but Sunday was one to remember, he says.

"We're not seeing too many of these guys," Boiter says.

As for Corl and Mattson, it was back to business and more sets.

"We got bait," Mattson says. "We're going to get ice here pretty soon and then head down to the south end of the Narrows."