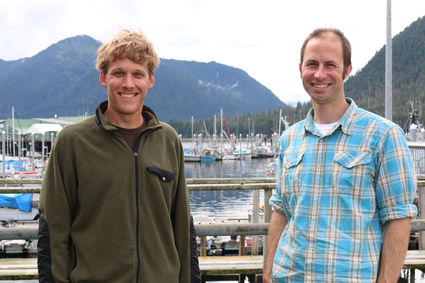 Dave Sutherland, left, and Jason Amundson are just two of the five researchers currently working on a project involving LeConte Glacier. They were in Petersburg this week and conducted fieldwork in LeConte Bay.

Researchers involved in a four-year collaborative project to study the impact of subglacial discharge at LeConte Glacier were in town this week to conduct fieldwork in LeConte Bay. The study is focused on improving our understanding of how tidewater glaciers interact with the ocean and how the ocean interacts with the glacier.

"Basically, the short story is we are looking at how runoff from the glacier affects circulation in the fjord, and then how that circulation then affects melting of the glacier face,'' says Jason Amundson, a glaciologist with the Department of Natural Sciences at the University of Alaska-Southeast (UAS). "Part of the project is just trying to quantify how much water comes out of the glacier at different times of the year, and the part is being in the fjord measuring water properties.''

The project aims to better understand what drives melting and calving, which has been a big question mark in the field of glaciology for the last 15 years. The results of the study should have implications for predicting sea level rise and changes to global ocean circulation. The same processes causing changes to a glacier in Greenland are happening in Alaska, but glaciers here are more accessible year round.

Amundson and a fellow UAS researcher, Roman Motyka, got the ball rolling on the project by bringing in Dave Sutherland a geological researcher from the University of Oregon. The pair knew Sutherland from meetings, and he pulled in other researchers to the project who were also interested and looking for funding. All told, the team ended up with five principal researchers and found funding with the National Science Foundation.

Sutherland recently helped complete a project in Greenland, producing valuable knowledge of how glacier systems work, but he says you wouldn't want to study a fjord there during winter. The goal of the LeConte project is getting a seasonal picture of the glacier.

Part of the reason this research is new is because the team is attempting to get as close to the glacier as possible to record data. LeConte may be accessible, but it's still a challenging environment to conduct fieldwork. It's not like studying a glacier that terminates on land, there are entirely new obstacles to overcome, Amundson says.

The fieldwork portion of this project will last for two years, and it started in March of this year. The team placed two data recording moorings in LeConte Bay close to the glacier face, and one outside the bay. They use remote cameras shooting time-lapse photos. The team is also collecting visual imagery of the glacier face located underwater.

All other fieldwork is being conducted by intensive survey and observation, including motorized boats they call "jetyaks'' and a lot of acoustic instruments. Being near the glacier and observing the environment can lead to new ideas being generated and it has positive impacts on researchers, Sutherland says.

"This trip we got within 250 meters of the face. It was pretty close, and we sent the jetyaks up a little closer than that,'' he says. "Right now, it's like a river coming out from that glacier and the currents are probably two or four knots.''

In 2013, the first proposal for this project was submitted and ultimately declined. The team responded to the comments of that proposal and resubmitted it the following year. In summer 2015, the team found out their revamped proposal was accepted, and began planning immediately, Amundson says.

"Things like, what boat are we going to use? What helicopter?'' he says.

The team will take six trips to the glacier to conduct fieldwork, the next will be in October. Then they'll be back next spring and late summer. Time between trips is spent processing data and planning goals for the upcoming trip. The team is already seeing the results of their effort and have "great data.'' 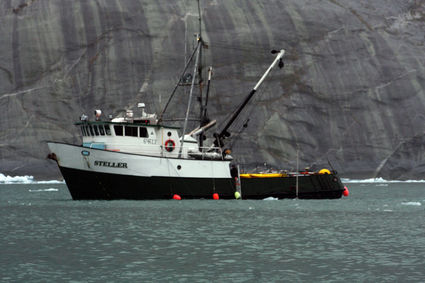 Research work is being carried out aboard the Steller, a leased vessel from Juneau. PHS Tsunami Bowl students spent two hours aboard the vessel last week learning about oceanographic work being conducted in the bay.

"We have a plan at the moment, but as we look at data that could change,'' Amundson says. "And it probably will, at least somewhat.''

Amundson and Sutherland are looking forward to their next trip to Petersburg and eventually publishing results. They are even working with teachers in the school district to hopefully present their data to students. The researchers have great respect for the effort of the Petersburg school, especially Paul Bowen, to get students active in studying LeConte Glacier.

"A lot of college students don't get that kind of access,'' Sutherland says.

Bowen noted that glacier studies by PHS students and the University of Alaska is made possible by a special use permit that was granted to PHS in 1983 and is still in affect today. Persons that helped secure the permit are Sam Bunge, Bill Tremblay and David Rak of the USFS; Brian Paust of the Alaska Marine Advisory Program and Temsco Helicopters.