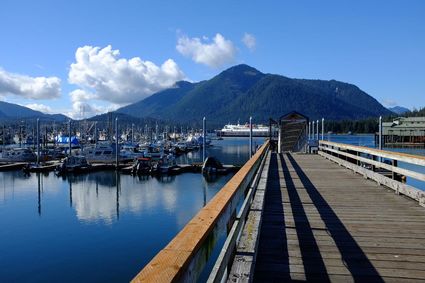 The state ferry Matanuska sails past Petersburg on Monday before Southeast Conference began its annual meeting. It was the conference's 58th annual meeting after being created in Petersburg in 1958 with the mission of establishing the Alaska Marine Highway System.

PETERSBURG – Ideas to reform the Alaska Marine Highway System were well received at Southeast Conference on Wednesday, but selling them to the rest of the state could be the largest gulf left to cross.

Some of the plans presented by Southeast Conference and its consultants, Elliott Bay Design Group and the McDowell Group, are ambitious – they're exploring whether the system can be recreated as an independent transportation authority or a state-owned corporation similar to the Alaska Industrial Development and Export Authority.

Even if it remains a piece of the Alaska Department of Transportation, they've proposed giving the ferry system control over its own labor negotiations and requiring one-year forward funding for the system – the dependability of which has been one of the victims of the Alaska Legislature's prolonged budget battles.

John Waterhouse, Elliott Bay's lead consultant for the project, said the replacement of system managers by state elections is "one of the biggest challenges" for state ferries.

Dave Kensinger, a Petersburg produce marketer and long a close observer and user of the system, said the ideas proposed during the conference were things he's heard before. He pointed to the reforms made by former Gov. Frank Murkowski and then reversed by his successor, former Gov. Sarah Palin.

"I don't want this exercise to be a generational exercise," Kensinger said, in which every two decades Southeast Conference again sets out to save the ferry system.

No matter what reforms are proposed, they'll ultimately end up on the desks of lawmakers, commissioners, the governor and possibly a vote of the people.

Gov. Bill Walker has so far supported Southeast Conference's effort. His transportation commissioners have participated in the process and spoke on Wednesday.

One of Walker's advisors, Rebecca Braun, said during discussion that the state's cash crisis has created a "fiscal imperative to do things differently" or the state would be at risk of losing the ferry system.

"As scary as it is, that actually helps animate the process," she said.

The lawmakers from parts of Alaska not served by the ferry system are another matter, and they represent the vast majority of the state's population.

Petersburg resident Cindi Lagoudakis put it another way: Southeast "provided tons of input" in support of the system during the legislative session but "until the McDowell Group said it was important to Anchorage, nobody paid attention."

One member of the conference steering committee guiding the reform project said it's up to the committee and the people on Alaska's southern coast to sell the project.

"This is not a priority for many people in the state of Alaska," said Anchorage business owner Greg Wakefield. "We can't just assume that we are going to be understood, because most people, probably the rest of the state, really don't know what the Marine Highway System is."