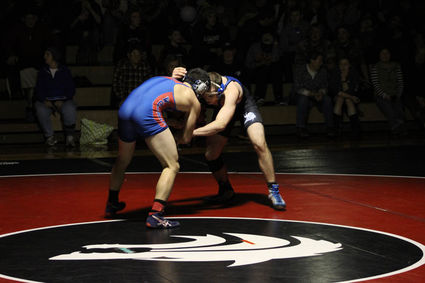 Nathaniel Lenhard, right, and Kyler Sumauang of Sitka size each other up at the start of their 152-pound championship match in Wrangell on Saturday.

The PHS wrestling team took the short trip to Wrangell last weekend to participate in the Tom Sims Invitational. According to coach Dan van Swearingen, the Vikings left a couple wrestlers home and some teams failed to show.

"It was a small tournament because the weather was terrible," he said. "We didn't have half the teams, but it was still a good weekend."

Seven teams participated in a round robin on Friday and bracket tournament the following day. On Saturday, Nathaniel Lenhard was seeded third and had a bye in the first round of Saturday's 152-pound bracket. The PHS senior took advant...