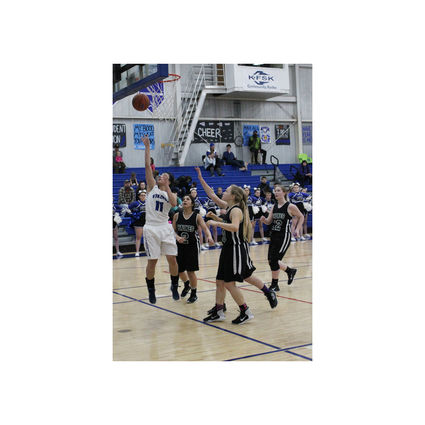 Senior Emma Chase shoots for two in Sunday's game versus Haines. She logged 20 points in all through both the weekend's games, and on Sunday made three of four free throw attempts.

Petersburg High School's girls added a pair of wins to their standings over the weekend, hosting Haines on Saturday and Sunday.

"They went well," coach Dino Brock said of the games.

In Saturday's game, Haines took an early lead over the hosts. The Lady Vikings struggled offensively at first, but as the game progressed their shooting improved. Their defense held Haines to a handful of points in the second quarter, and a scoreless fourth.

"The girls played very well defensively," Brock noted. "It was a team effort."

Petersburg logged 25 points in the latter half, finishing with a 37-15 win.