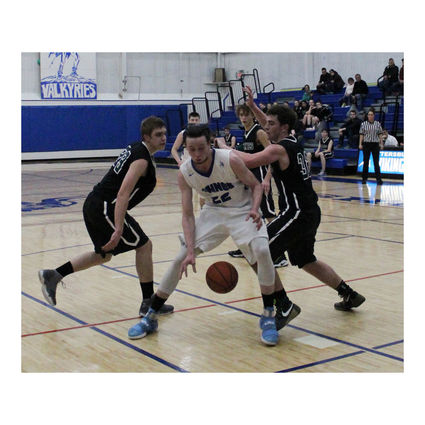 Brooks tries to maintain control of the ball while surrounded by Glacier Bears on Saturday.

The Vikings hosted Haines over the weekend, adding two more wins to a lossless season so far.

"It was a good team effort this weekend," said Petersburg coach Rick Brock.

"I was real happy with our half-court defense," he explained. Players worked well together, completing passes and transitioning well.

Defense played a factor in the weekend's games, with Petersburg holding the Glacier Bears scorers back in a hard-fought 69-45 win Saturday.

Brock explained one of the team's strengths is its balanced scoring, always emphasizing defense during play. "I think that showed this weekend."