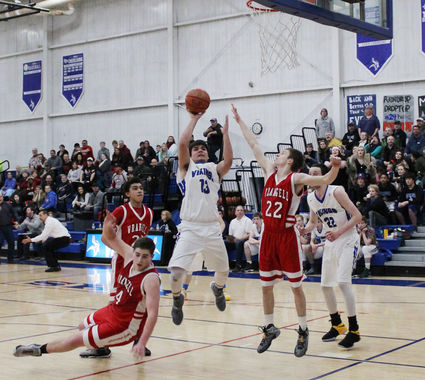 Leading his team for scoring on Saturday, Stewart Conn attempts to add to his weekend total of 28 points.

In their last home games for the season, the Petersburg High School boys added two more wins to their standings before heading into regionals.

The team hosted Wrangell for its Homecoming weekend. In Friday night's game, the Wolves started ahead, holding Petersburg to a 7-13 tail in the first quarter.

"Wrangell started out playing very aggressive on the defensive end," noted Vikings coach Rick Brock. The team picked up a rhythm going into the next eight minutes, but the visitors' defense continued to give themselves the edge going into the next half.

"Wrangell definitely was still causing us...