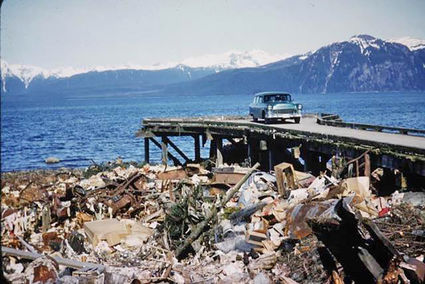 The Petersburg dump was located on the waterside of Sandy Beach Road up until about 1967-68 when it moved to its current location up the hill from Sandy Beach. The dump has since been filled over and is the site of the Jody Tow home that was built by her grandfather Jim Leekley. Jean Curry stated that the station wagon sitting on the dock was owned by the Sandvik family. Local youth recall that the dump was considered, "out the road," and guys and gals would park on the dock because they could get radio reception from Lower 48 stations on their car radios.

Since the middle of June, the borough's trash baler has been up and running after weeks of repairs shut it down.

The baler first stopped operating after the conveyor broke down in April, said public works director Chris Cotta. After about a week, the baler was operating again, but immediately afterwards the processor unit failed. Another five weeks was needed to address the processing unit, said Cotta.

"It has been working fine ever since," said Cotta.

The baler consists of several components. Trash is loaded onto the conveyor, which dumps it through a hopper and into the baler chamber. T...