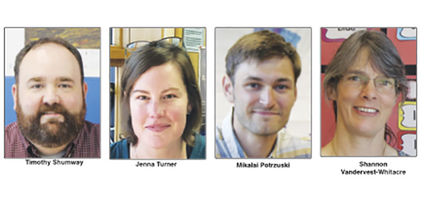 Mikalai Potrzuski will be teaching 7th grade geography, 8th grade US history and 6th, 7th and 8th grade PE. Shannon Vandervest-Whitacre will be teaching first grade after she substituted in the spring. Timothy Shumway is the 6th, 9th and 11th grade language arts teacher. Jenna Turner will be joining the district as the middle school and high school counselor.

Heidi Cabral will be a middle school aide, while Debby Eddy, Brittany Richardson and Hillary Mullen will be elementary school aides.

"I love Southeast Alaska," said Potrzuski. "If I can be here and teach, that's the ideal situation for me."

Potrzuski comes to the School district from Sitka. He graduated from Western Washington University with a history degree focusing on economy, geography and political science. He got a master's degree in education from the University of Alaska Southeast. Growing up, he was always around a learning environment because both his parents were teachers. The fact that some of the people who had the biggest impact on his life were his middle and high school teachers made him want to become a teacher himself. After visiting Gettysburg as a kid, he became hooked on history. Plus, sports have always been a big part of his life. As the district's newest social studies and PE teacher, Potrzuski's background makes him a good fit.

For the past 15 years, Vandervest-Whitacre has had her teaching credentials. Since she does commercial fishing with her husband, there has never been a need for her to teach. She was a substitute teacher for 1st grade in the spring.

"For the first time in ages, I felt alive," said Vandervest-Whitacre. "I just felt like, 'wow, this is real fun.' For some reason, this age group really connected."

She hopes to bring her extensive knowledge to the classroom to help the kids learn instead of focusing solely on the textbook.

Vandervest-Whitacre has been in Petersburg for the past 28 years. She was originally from Washington, but has lived just about everywhere else ever since. Before coming to Petersburg, she and her family were living remotely on an island at the end of the Narrows. Demands of a growing family caused her to move to Petersburg where she has been gill netting until this summer.

With previous teaching experience in Alaska, Shumway comes from a small town in Western Maine. After graduation he began looking for an adventure. He took a job teaching at a district in the bush based in Aniak. After several years, he eventually moved back to Maine and was teaching at a middle school, but Alaska was calling.

"Alaska kind of has an allure for anyone from the lower 48," said Shumway. "It gets under your skin."

After graduating from the University of Montana, Missoula with a master's degree in counseling, Turner took a job in the Alaskan interior 300 miles west of Fairbanks. From there, she went to Wrangell and then Sitka. While at the Petersburg School District, Turner wants to get the kids to begin thinking about their future careers. She wants to give them the tools to understand their interests and skills so that they can start matching themselves with possible careers. Turner looks forward to getting to know the students and the residents of Petersburg.

"I got a good sense that this is going to be a good fit for me and for the school," said Turner. "The minute I put my feet on the ground and met the people at the school, I was sold."