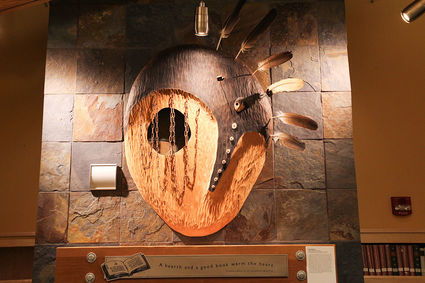 A piece at the De-Colonize Alaska art exhibit by Drew Michael is titled, 'What Is My Story?' In a description of the piece, Michael states that every generation is met with the same challenge of asking one's self, "What is my story?" He states that everyone's story is in a state of constant rewrite, which tradition feeds into.

On Friday, the Petersburg Public Library and the Clausen Museum hosted an opening reception for the De-colonizing Alaska art exhibit.

The exhibit seeks to de-colonize Alaska art, which has had representations of colonization and repression, by pulling away from stereotypical depictions of Alaska such as dogsleds, Eskimos and igloos, according to the curator of the exhibit Asia Freeman. The 31 artists featured in the exhibit move towards ideas that challenge historic definitions of Alaskan Art. The artists are both Alaskan Native and non-native.