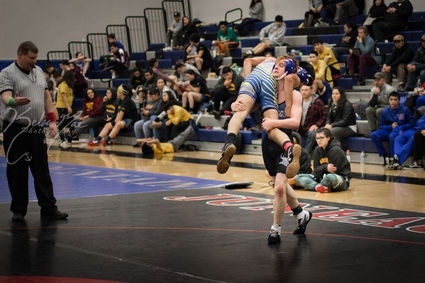 Reed Anderson competing in the final match for the 125 weight class at the regional tournament in Juneau over the weekend. He lost the match against Zach Giron of Sitka and came in second place.

The Petersburg High School girls wrestling team came in third place and the boys team came in fifth place for the Division II schools at the regional tournament in Juneau this past weekend, with four wrestlers placing first in their weight classes.

Jolyn Toyomura placed first in the 119 weight class scoring the team 20 points. She had been injured most of the season and was cleared last week to go to the tournament, said Van Swearingen. She was able to beat a wrestler from Mt. Edgecumbe for first p...