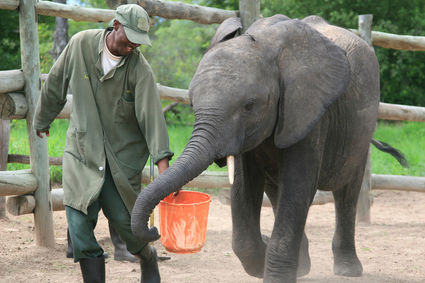 Batoka eagerly rushes towards a bucket of food during feeding time.

Next week Kelly Bakos will be screening her award-winning documentary film, A HERD OF ORPHANS, which looks at the lives of young elephants who were abandoned when adult elephants in their herds fell victim to poachers in the African ivory trade.

The 90-minute documentary has been shown in film festivals across the world, including Estonia, Finland, Malaysia and China. Bakos has attended several of the festivals and won four Awards of Excellence from The Accolade Global Film Competition. A HERD OF ORPHANS won the Award of Excellence in Nature/Environment/Wildlife, Viewer Impact: Content/Mess...