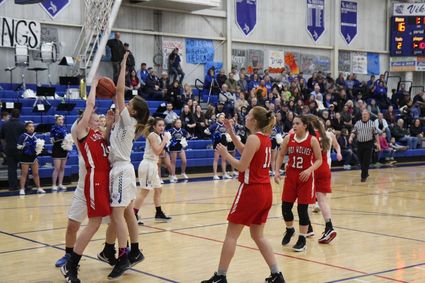 Adrianna Stough blocks her opponent from passing the ball.

The girls varsity basketball team lost their last two home games of the season against Wrangell over the weekend.

"Wrangell's good," said Coach Dino Brock. "They're big. They're one of the top ranked teams in the state. I thought that we were competitive with them in the games. It's a good way to get ready for tournament."

Friday's game began with Senior Appreciation Night. Seniors Holli Davis and Tayla Heppe, along with their families, were thanked for their dedication throughout the season.

The game didn't start off too well for the Lady Vikings. They didn't score for the first nine min...