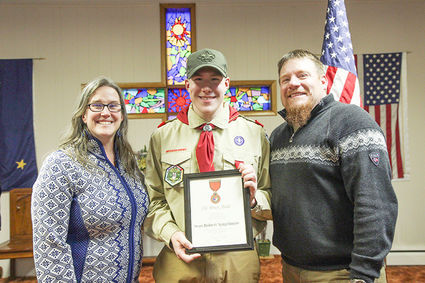 Sean Spigelmyre poses with his Honor Medal after Friday's ceremony. From left to right: Julie, Sean and Don Spigelmyre.

Don Spigelmyre was overcome with panic as the ocean's current pulled him out and water filled his mouth. He managed to yell for help, and his son sprang into action. Sean Spigelmyre swam out to his father, grabbed his arm and began side stroking back to shore.

"I wouldn't be here today," said Don Spigelmyre. "There is no way."

On Friday, Sean was awarded the Boy Scout's Honor Medal for the heroic rescue of his father in January of 2017 in Kauai, Hawaii.

Sean has been with the Boy Scouts since he was in fifth grade when he was promoted from the Cub Scouts. All Cub Scouts graduate into a Bo...