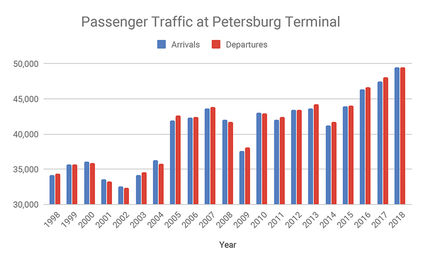 After 3-months of interviews the staff of the Petersburg Pilot present this special report on the demands for space at Petersburg's James A. Johnson Airport. As the 1991 expanded Alaska Airlines terminal facility has become more congested, the long-term and short term parking more chaotic, we talked to numerous sources about the issues and prospects for improvements at the airport.

The Petersburg Alaska Airlines terminal is one of five terminals throughout the state that are next in line to receive some form of upgrades as part of a $100 million initiative to either expand or remodel all 11 of the airline company's owned terminals in Alaska, according to regional vice president Marilyn Romano.

The Alaska Airlines 2020 Great Land Investment Plan first began in February 2017 as a brand overhaul that featured a new logo and updates to their terminals, but soon included a reconfiguration of their fleet, according to Romano.

So far, updates have been completed at the Kodi...