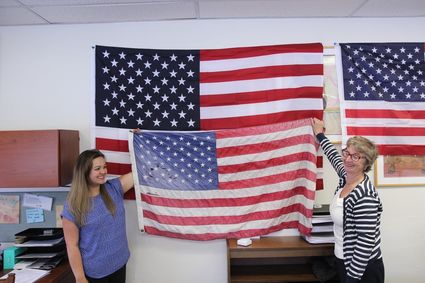 In celebration of Flag Day last Friday, Petersburg-Wrangell Insurance, in cooperation with the Elks Lodge and Emblem Club, held a flag exchange. Residents could bring in their worn out American flags and exchange them for new flags free of charge. In 2017, the first year of the exchange, over 170 flags were distributed for free and 45 were received in return. Then in 2018, 13 flags were returned and 15 flags were given away. That year, Petersburg-Wrangell Insurance did not give out flags without the individual turning in a worn out flag. On Friday, an even 13 flags were turned in and 13 were given away. The used flags are given to the Boy Scouts who, with help from the Coast Guard, properly dispose of the flags by burning them. Flag Day is a national holiday that recognizes the adoption of the U.S. flag on June 14, 1776. According to military.com, Flag Day dates its beginnings to the 1880s when teacher BJ Cigrand organized a group of Wisconsin students to observe the flag's birthday. The holiday was officially recognized by President Woodrow Wilson in 1916. "We're happy to do it," said Susan Erickson, owner of Petersburg-Wrangell Insurance. "We're happy to display the flag and everything that it means to our citizens." Veronica Maldonado, left, and Erickson compare one of the worn out flags to a new flag to show the difference in the condition of the two flags.