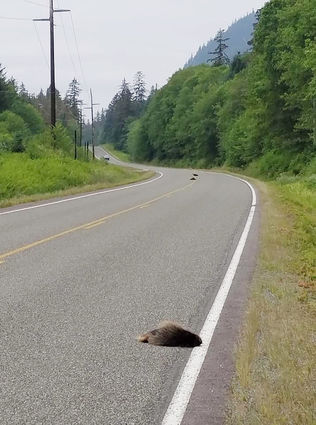 Three of the porcupine carcasses that were seen on Mitkof Highway last week between the 18 and 20 mile mark.

It was around noon on July 3 when Tim Koeneman was driving out the road to take his dog for a walk when he began to notice porcupine carcasses scattered on Mitkof Highway between Blind Slough and Manmade Hole. He said he counted about 14 porcupines in the roadway.

"Approximately half of what we counted were young porcupine," said Koeneman.

State Trooper Cody Litster was out on the water when he began getting phone calls from residents saying there were dead porcupines in the middle of the road. He said he didn't think too much about it because every once in a while, a porcupine will get hi...