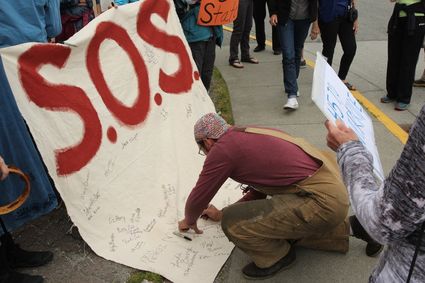 Josef Quitslund signs his name to the canvass that was sent to Alaska Legislators.

Cars were driving by honking and rock 'n' roll music was playing as nearly 100 residents gathered in front of the Petersburg Courthouse on Tuesday at 12 P.M. to protest Gov. Mike Dunleavy's 182 vetoes.

Protestors were carrying signs that read "override," and "save our state." They were also signing their names on a piece of canvass that had the letters S.O.S. on it. One of the organizers, Chelsea Tremblay, said that the canvass will be sent to legislators to show that they have the support of their constituents if they decide to override the governor's vetoes.

"I'm really concerned for the...