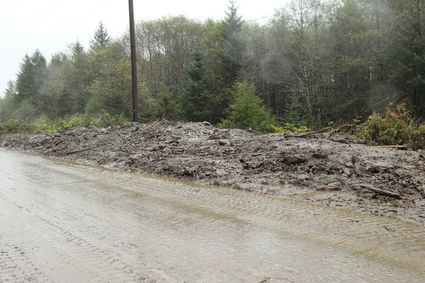 Department of Transportation staff pushed the debris to the side of the road.

The Department of Transportation responded to a landslide near the 18 mile marker of Mitkof Highway on Saturday.

The landslide was first reported to DOT at 2:30 A.M. Saturday morning by the Petersburg Police Department, according to Meadow Bailey, a spokesperson with DOT. Staff was able to reach the landslide, which had blocked the entire street, with equipment by 4:30 A.M. Mud and debris covered the road for about 300 feet and was approximately three feet deep.

"[The landslide] was extensive enough that vehicles could not pass before the debris was cleared away," said Bailey in an email....