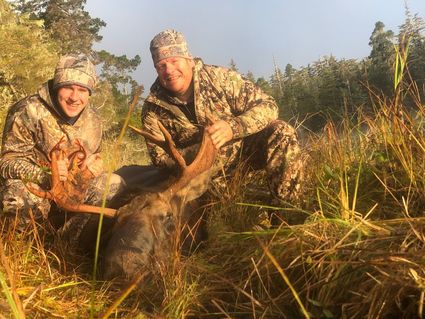 Sean Spigelmyre, left, and Don Spigelmyre pose with the moose they shot near Duncan Canal on Saturday.

This year's moose harvest looks to be above the five- year average with the moose count at 64 just 17 days into the season.

Between 2014 and 2018, the average moose count for this time of the season was 58. There was a dip in the moose harvest this time last year, with only 42 being taken. Fish and Game Area Biologist Frank Robbins said the warm weather last fall may have been a factor in the low number of moose being taken. In 2017 and 2016, the moose harvest was 64 about 17 days into the season. That same number in 2015 and 2014 was a little lower at 60 and 58 respectively.