Town without power for second Sunday 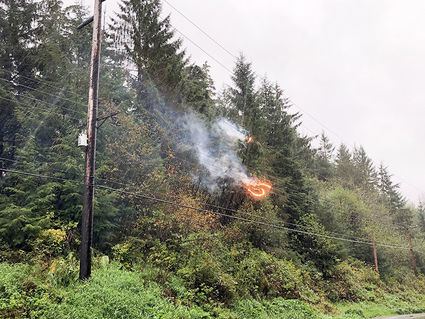 A power outage occurred Sunday after a tree began leaning against power lines on Mitkof Highway and caught on fire.

Petersburg was without power Sunday after a tree touching a power line at the 4.7 mile mark of Mitkof Highway acted as a conductor, causing Southeast Alaska Power Agency's protective relays on their transmission lines to trip.

Before the power went out at approximately 11:30 A.M., the tree that was touching the power line caught on fire, but it eventually put itself out, according to Utility Director Karl Hagerman. The responding power and light line crew was able to restore power within the hour, but a second, unrelated problem occurred on Marian St. causing the power outage to last an ad...