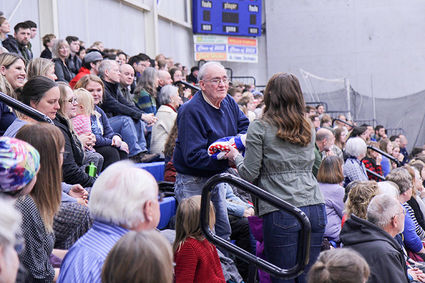 Madison Whitethorn, right, presents Stan Eilenberger with a quilt made by the Quilts of Valor at Monday's Veterans Day assembly for his service in the United States Marine Corps.

Stan Eilenberger had just finished a week's worth of finals at Colorado State University in December 1960 when he met a United States Marine Corps recruiter. A few days later, he was a Marine.

"Monday morning, I was sitting in San Diego," said Eilenberger. "I said, 'Did I make a mistake?' Out of the few mistakes I made, it was a good one."

Eilenberger was studying electrical engineering in college, so after he finished boot camp, the Marine Corps began training him to be a radio relay technician. He was then transferred to Cherry Point, North Carolina, where he would serve his country for t...