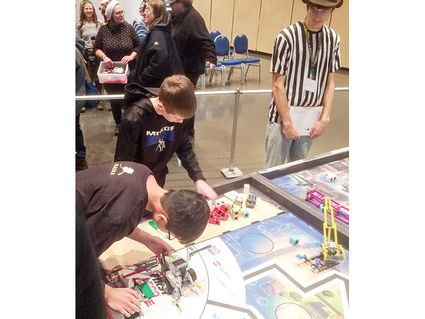 Adrian Ducat, left, and Elias Ward prepare their robot for the competition in Juneau on Saturday.

Seven Mitkof Middle School students used preprogrammed robots in a regionwide robotics competition on Saturday in Juneau to perform missions worth a variety of points.

There were 20 teams at the competition made up of over 100 students throughout Southeast Alaska. The seven Petersburg students were split into two teams and placed 14th and 17th place in the competition overall. Over the course of three rounds, each team had two and a half minutes per round to execute as many missions as possible with their robots.