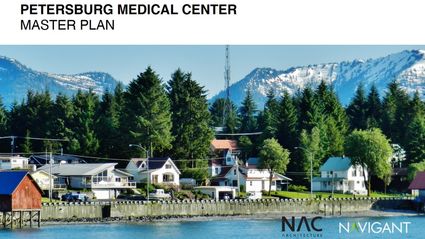 Click on the photo above to see Petersburg Medical Center- Master Plan presentation.

"The purpose of a master plan is to determine how PMC can remain a viable partner and provide the best possible community healthcare well into the future," said Jardine.

Three conceptual layouts were created using data put together as part of the masterplanning. Two of the layouts were placed on a lots on Haugen Dr. between S. 8th St. and 12th St. The third layout was placed over the hospital's current lot and extended over N. 2nd St. to the area east of PMC. Estimations using Seattle pricing show the total estimated construction costs of the three conceptual schemes ranging in price from $66,014,269 to $78,927,622. Estimated total project costs for the three conceptual schemes ranged from $92,419,977 to $110,498,670.

As part of the masterplanning, NAC Architecture conducted several analyses. A seismic analysis of the existing facility found three potential deficiencies in the long term care wing and the hospital building, according to Jardine. An inundation study showed no benefit of building closer to the airport to lessen the impact of a tsunami. A tsunami would dissipate before reaching Petersburg, said Jardine, but a large flank collapse of Petersburg Mountain would create a tsunami that would wipe out the whole town, negating any preventative planning.

A market assessment of the Petersburg service area showed a slow population increase, but a three percent increase in age 65 and over residents in the next five years, according to Jardine. Inpatient use rates were projected to grow less than one percent per year. Outpatient volume will increase slightly more than inpatient volume. The percentage of Medicare patients is expected to grow in line with the aging population. The number of privately insured patients is expected to decrease by five percent in the next 10 years.

After looking at all their data, Jardine said NAC Architecture predicted that the current 12 acute beds would be sufficient. The 15 long term care beds are near or at capacity and PMC could support 20 beds by 2029. NAC Architecture also recommended ancillary services, such as ultrasound, X-ray and outpatient surgery, to only require a single room each.

Looking at PMC's financial statements and the data collected as part of the masterplanning, NAC Architecture estimated that PMC's debt capacity is at $5 million.

In their masterplanning, NAC Architecture used five sites recommended by the borough to consider as possible locations for a new facility, said Jardine. One site uses PMC's current position and extends east into the adjacent lot. Two lots are placed north and south of Haugen Dr. in the area between S. 8th St. and 12th St. Another site was in the area between Excel St. and Mountain View Manor. The last site was between N. 8th St. by Lighthouse Assembly of God Church and the Petersburg ball fields.

The five sites were ranked using ten advantages for a new hospital, including access to utilities, muskeg risk, structures to demolish and size. The South Haugen site was first, followed by the North Haugen site, the N. 8th St. site, the Excel St. site and last was the downtown site.

Two single-storied conceptual models were created on the North Haugen site. Jardine said he chose that site as a jumping off point and that the site wasn't preferred over the other sites. Both the layouts, Greenfield Scheme 7A and Greenfield Scheme 7B, are nearly identical, but Greenfield Scheme 7B uses a more compact layout that puts the clinic in the front of the building.

Because the downtown site is on a slope, and space is limited, the Downtown Scheme utilizes three floors. Jardine said this layout presents unique problems because it extends into the lot east of the current facility. The hospital would have to get permission to build over the portion of N. 2nd St. that separates the two lots. Additionally, the hospital would have to purchase lots to free up the area on the other side of N. 2nd St. The Clausen Memorial Museum would also be displaced.

Phil Hofstetter, PMC CEO, stated the numbers presented are what the reality is of building a new facility. By having a completed master plan that includes cost estimates and possible sites, PMC would be able to receive funding from outside sources more easily.

"We can't do anything without a master plan," said Hofstetter.

After the presentation, the approximately 60 people in the audience had the opportunity to ask questions.

One PMC staff member had concerns about the availability of parking in the downtown scheme. Jardine noted that because space is limited in the downtown area, there wouldn't be as much parking for the hospital as one of the Haugen Dr. schemes.

Sue Erickson asked Jardine to explain the availability of utilities in each of the possible areas. He replied that utilities are easily accessible in downtown and the two Haugen Dr. schemes, but utilities would have to be brought into the Excel St. and N. 8th St. sites from a nearby neighborhood.

Other attendees asked if nearby residents would be consulted before moving forward with construction on one of the possible locations. Jardine said that while he wasn't sure of the specifics, the borough does have a mechanism in place for the construction of a large building, which addresses public concerns and support. 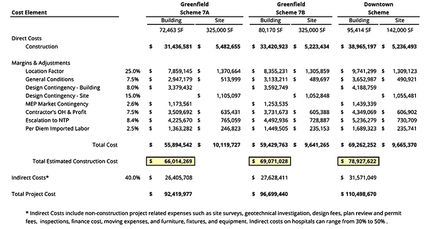 "I appreciate that none of those property owners want the hospital in their backyard," said Erickson. "Isn't there any other opportunities on Haugen where nothing is around?

Jardine replied that the five sites they looked into were selected by the borough, but he would be open to looking at alternatives.

One woman in the audience was concerned in maintaining the atmosphere of the downtown area.

"I would like it taken into account that the downtown site is in the middle of the most historic neighborhood in Petersburg, and it would change the dynamic there," she said.

Other residents were concerned about traffic flow, particularly near the two Haugen Dr. sites. Jardine said a traffic engineer hadn't been consulted yet, but when PMC decides to look at a particular site more seriously, a traffic engineer would be brought in to determine if an extra lane would need to be added or if a street would need to be widened.

"This is just the first of many conversations," said Hofstetter.