A promotion, a new trooper and a new location 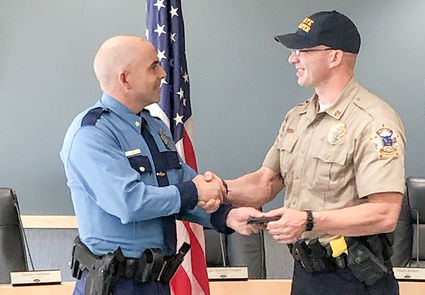 Major Bernard Chastain of the Alaska Wildlife Troopers presents Cody Litster, right, with sergeant badges in a ceremony in September.

Over the past several months Cody Litster, Petersburg's Alaska Wildlife Trooper, has been busy settling into his new role as a sergeant for the Central Southeast Alaska's wildlife troopers, making preparations for a second wildlife trooper and moving into a spacious new facility by the airport.

Litster was promoted in September of last year when the state decided to move the Central Southeast Alaska sergeant position, which was originally stationed in Juneau, closer to the area it supervises. Litster had just under 17 years as a wildlife trooper, serving in the Petersburg and the Matanuska-...