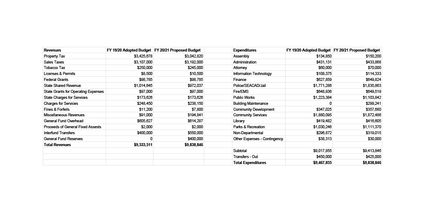 The borough assembly passed an ordinance adopting the borough's fiscal year 2021 operating budget in its first reading on Monday. Expenditures for the general fund in the proposed budget total $9,838,846, but it's balanced out equally by $9,838,846 in revenues. The current 2020 fiscal year budget has a total of $9,533,511 in revenues and $9,467,855 in expenditures.

There were several challenges facing department heads in creating the upcoming fiscal year's budget. Gov. Mike Dunleavy vetoed 100 percent of the school bond debt reimbursement for fiscal year 2021, resulting in a loss of $470,0...